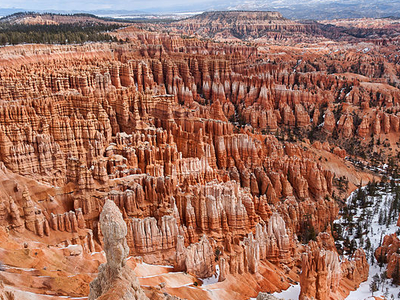 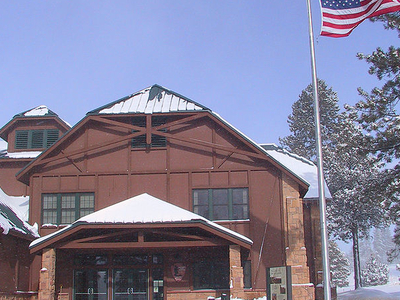 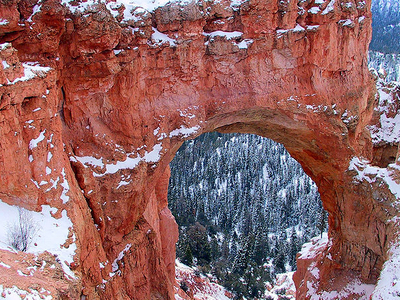 More Photos >
Save me
Been here
Want to go
Show on Map
Here to help 4 tour guides and 5,451 locals

Bryce Canyon National Park is a National Park located in southwestern Utah in the United States. The major feature of the park is Bryce Canyon, which despite its name, is not a canyon, but a collection of giant natural amphitheaters along the eastern side of the Paunsaugunt Plateau. Bryce is distinctive due to geological structures called hoodoos, formed by frost weathering and stream erosion of the river and lake bed sedimentary rocks. The red, orange, and white colors of the rocks provide spectacular views for park visitors. Bryce sits at a much higher elevation than nearby Zion National Park. The rim at Bryce varies from 8,000 to 9,000 feet (2,400 to 2,700 m).

The Bryce Canyon area was settled by Mormon pioneers in the 1850s and was named after Ebenezer Bryce, who homesteaded in the area in 1874. The area around Bryce Canyon became a National Monument in 1923 and was designated as a National Park in 1928. The park covers 35,835 acres (55.992 sq mi; 14,502 ha; 145.02 sq km) and receives relatively few visitors compared to Zion National Park and the Grand Canyon, largely due to its remote location.

The park also has two trails designated for overnight hiking: the 9-mile (14 km) Riggs Spring Loop Trail and the 23-mile (37 km) Under-the-Rim Trail. Both require a backcountry camping permit. In total there are 50 miles (80 km) of trails in the park.

More than 10 miles (16 km) of marked but ungroomed skiing trails are available off of Fairyland, Paria, and Rim trails in the park. Twenty miles (32 km) of connecting groomed ski trails are in nearby Dixie National Forest and Ruby's Inn.

The air in the area is so clear that on most days from Yovimpa and Rainbow points, Navajo Mountain and the Kaibab Plateau can be seen 90 miles (140 km) away in Arizona. On extremely clear days, the Black Mesas of eastern Arizona and western New Mexico can be seen some 160 miles (260 km) away.

The park also has a 7.4 magnitude night sky, making it one of the darkest in North America. Stargazers can, therefore, see 7,500 stars with the naked eye, while in most places fewer than 2,000 can be seen due to light pollution, and in many large cities only a few dozen can be seen. Park rangers host public stargazing events and evening programs on astronomy, nocturnal animals, and night sky protection. The Bryce Canyon Astronomy Festival, typically held in June, attracts thousands of visitors. In honor of this astronomy festival, Asteroid 49272 was named after the national park.

Here's the our members favorite photos of "National Parks in Garfield County". Upload your photo of Bryce Canyon National Park!

Going to Bryce Canyon National Park? Get answers from our friendly locals