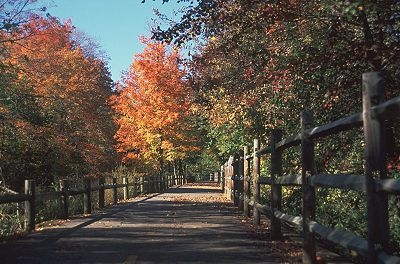 The Blackstone River Bikeway is a planned 48-mile (77 km) paved rail trail defining the course of the East Coast Greenway through the Blackstone Valley from Worcester, Massachusetts to Providence, Rhode Island. Approximately 10 miles (16 km) of the trail has been completed in Rhode Island, connecting the communities of Woonsocket, Lincoln, Cumberland and Manville. 2.5 miles (4.0 km) of completed trail in Massachusetts connect Worcester and Millbury.
The path follows follows the right-of-way of the old Providence and Worcester Railroad and its predecessor, the Blackstone Canal, running alongside the Blackstone River. Once constructed, the bikeway will be linked to the East Bay Bike Path, for an additional 14.5 miles (23.3 km) of trail to Bristol, Rhode Island. The Blackstone River Bikeway is also a designated section of the East Coast Greenway, the 2900-mile trail system connecting cities from Maine to Florida.

Here's the our members favorite photos of "Trails in Lincoln". Upload your photo of Blackstone River Bikeway!

Going to Blackstone River Bikeway? Get answers from our friendly locals