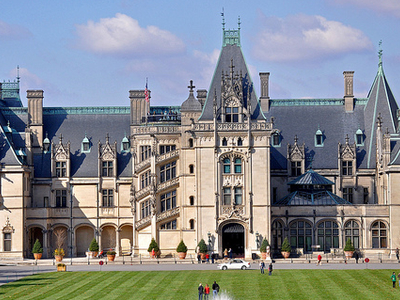 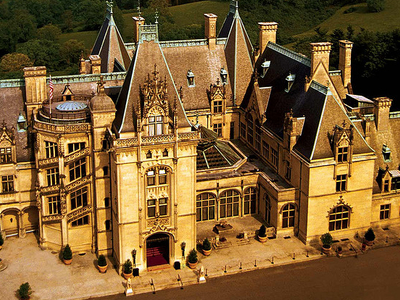 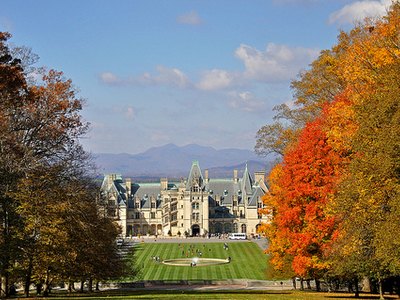 Biltmore Estate is a large private estate and tourist attraction in Asheville, North Carolina. Biltmore House, the main house on the estate, is a Châteauesque-styled mansion built by George Washington Vanderbilt II between 1889 and 1895 and is the largest privately owned house in the United States, at 178,926 square feet (16,622.8 Sq mi) and featuring 250 rooms. Still owned by one of Vanderbilt's descendants, it stands today as one of the most prominent remaining examples of the Gilded Age, and of significant gardens in the jardin à la française and English Landscape garden styles in the United States. In 2007, it was ranked eighth in America's Favorite Architecture by the American Institute of Architects.

History
In the 1880s, at the height of the Gilded Age, George Washington Vanderbilt, youngest son of William Henry Vanderbilt, began to make regular visits with his mother, Maria Louisa Kissam Vanderbilt (1821–1896), to the Asheville, North Carolina, area. He loved the scenery and climate so much that he decided to create his own summer estate in the area, which he called his "little mountain escape," just as his older brothers and sisters had built opulent summer houses in places such as Newport, Rhode Island, and Hyde Park, New York.

Architecture
Vanderbilt's idea was to replicate the working estates of Europe. He commissioned prominent New York architect Richard Morris Hunt, who had previously designed houses for various Vanderbilt family members, to design the house in the Châteauesque style, using several Loire Valley French Renaissance architecture chateaux, including the Chateau de Blois, as models. The estate included its own village, today named Biltmore Village, and a church, today known as the Cathedral of All Souls.

Tourist attraction
In an attempt to bolster the estate's financial situation during the Depression, Vanderbilt's only child, Cornelia Stuyvesant Vanderbilt, and her husband, John Amherst Cecil, opened Biltmore House to the public in March 1930. Family members continued to live there until 1956, when it was permanently opened to the public as a house museum. Visitors can view the 70,000-gallon (265,000-litre and 265-cubic meter) indoor swimming pool, bowling alley, early 20th century exercise equipment, two-story library, and other rooms filled with artworks, furniture and 19th-century novelties such as elevators, forced-air heating, centrally controlled clocks, fire alarms and an intercom system. The estate remains a major tourist attraction in Western North Carolina and has almost 1 million visitors each year.

Present
The estate today covers over 8,000 acres (3,200 ha) and is split in half by the French Broad River. It is owned by the Biltmore Company, which is controlled by Vanderbilt's grandson, William A.V. Cecil, Sr., who inherited the estate upon the death of his mother Cornelia. William, Sr.'s son, Bill, Jr., serves as company president. In 1964, it was designated a National Historic Landmark. The dairy farm was split off into Biltmore Farms, run by William Cecil's brother, George Henry Vanderbilt Cecil. William Cecil converted the former dairy barn into the Biltmore Winery.

Here's the our members favorite photos of "Historic Houses in Asheville". Upload your photo of Biltmore Estate!

Going to Biltmore Estate? Get answers from our friendly locals