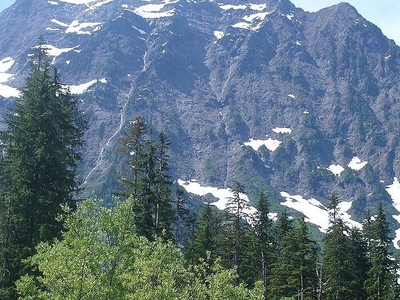 Big Four is a mountain in the Cascade Range, located about 20 miles (32 km) east of Granite Falls, Washington. Debris piles on the mountain's northern flank form as a result of avalanche activity. These fields of disturbed snow are able to remain year round in the shadow of the mountain. During the summer months snow-melt streams flow beneath the debris piles and cause caves to form in the ice. The caves vary in size from season to season and are unpredictably dangerous. The mountain is open to the public and a large snowfield can be reached by a short trail, but the snowfield itself is off-limits due to cave-ins and slides which have killed hikers in incidents in 1998 and in 2010.

Here's the our members favorite photos of "Peaks or Summits in Sultan". Upload your photo of Big Four Mountain!

Going to Big Four Mountain? Get answers from our friendly locals

Peaks or Summits in Washington