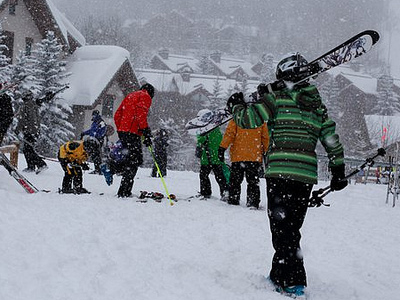 White River National Forest
Beaver Creek ski area operates on National Forest System lands under special use permit to the White River National Forest. The 30-year permit assigns a portion of the bundle of rights associated with land ownership to the permit holder. All lifts, ski trails, and facilities must be approved by the Forest Service in advance prior to construction. Master development plans, construction plans, and summer and winter operating plans are approved by the federal agency prior to each season of operation.

Grand opening
The Beaver Creek Resort opened in 1980 with 425 acres (1,720,000 m2) of skiable terrain, 4 chairlifts and 28 runs. Although he had originally opposed it, Governor Richard Lamb referred to the ski area during the grand opening ceremonies as the Tiffany's of ski resorts. As of December 2011, the Resort reported 1,815 acres (7,350,000 m2) of skiable terrain, 25 lifts, and 149 runs. The late U.S. President Gerald Ford and Betty Ford owned a home in Beaver Creek. Steve Fossett also lived here. Kelsey Grammer and his ex-wife Camille Grammer had a house in Beaver Creek, and an episode of The Real Housewives of Beverly Hills was shot here.

Gerald Ford
The community is home to the annual AEI World Forum, founded by Ford, and the annual Bravo! Vail Valley Music Festival. Beaver Creek was the host to Gerald Ford hosted annual summits for the retired heads of Europe at Beaver Creek.

Here's the our members favorite photos of "Towns & Villages in Colorado". Upload your photo of Beaver Creek!

Going to Beaver Creek? Get answers from our friendly locals