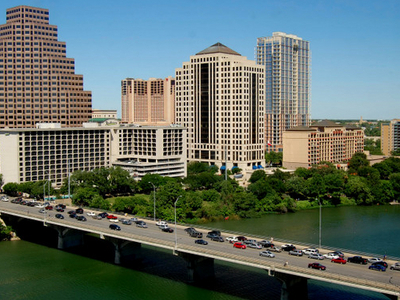 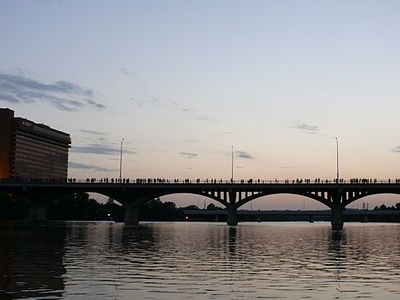 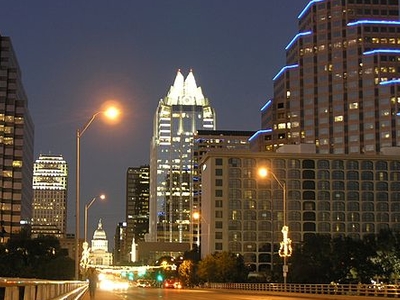 The Ann W. Richards Congress Avenue Bridge (formerly known simply as the Congress Avenue Bridge) crosses over Lady Bird Lake in Austin, Texas. Before construction of the Longhorn Dam was completed in 1960, the bridge crossed the Colorado River from which Lady Bird Lake is impounded. The bridge was known as the Congress Avenue Bridge from the construction of the first span across the Colorado River at that location in the late 19th century until November 16, 2006, when the Austin City Council renamed the current bridge in honor of Ann W. Richards, the 45th Governor of Texas and a long-term resident of Austin. The bridge is a concrete arch bridge with three southbound and three northbound vehicle lanes and sidewalks on both sides of the bridge.

History
The first bridge across the Colorado River in this location was constructed in 1869 or 1871. The original structure was a pontoon toll bridge. In 1875, a new wooden toll bridge was constructed across the river. Bridge construction was finished at a cost of $80,000; an additional $20,000 was used to macadamize dykes across lowlands and a culvert over Bouldin Branch. On one occasion, a herd of cattle caused a span 50 feet above the water to give way. Only a few cattle were rescued.

On January 22, 1884, a modern iron bridge funded by private interests was opened at a cost of $74,000. There were sufficient spans to allow for the highest stage of overflow when the river flooded. The bridge was designed and built by engineer C. Q. Horton. The bridge was purchased by the Travis County Road and Bridge Co. and the City of Austin on June 18, 1886. By 1891, the Travis County Road and Bridge Co. refused to care for the bridge, and Travis County Commissioners negotiated an agreement whereby the City of Austin assumed complete control of the operation of the bridge. The city was forced to repair the bridge in 1892 and again in 1897, when the city paid half the cost for reflooring, a task that took until 1901 to complete. The bridge was repainted in 1902.

Bats
Ann W. Richards Congress Avenue Bridge is home to the World's largest urban bat colony which is composed of Mexican free-tailed bats. The bats reside beneath the road deck in gaps between the concrete component structures. They are migratory, spending their summers in Austin and the winters in Mexico. According to Bat Conservation International, between 750,000 and 1.5 million bats reside underneath the bridge each summer. Since Austin's human population is about 750,000, there are more bats than people in Austin during summer.

Here's the our members favorite photos of "Bridges in Austin". Upload your photo of Ann W. Richards Congress Avenue Bridge!