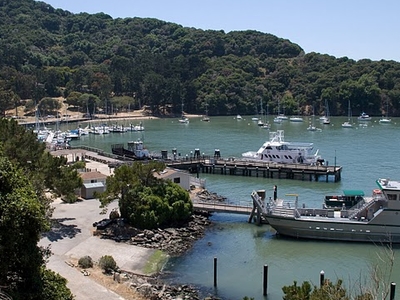 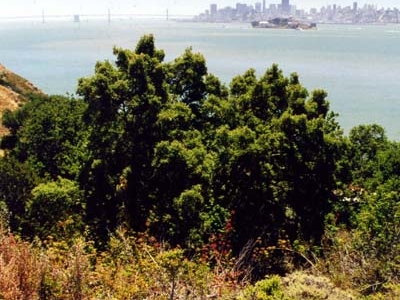 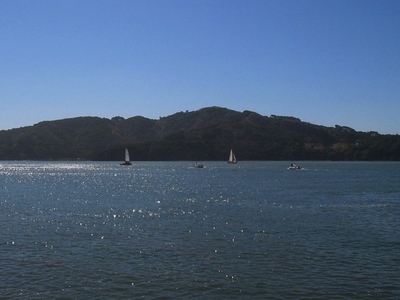 Angel Island is an island in San Francisco Bay that offers expansive views of the San Francisco skyline, the Marin County Headlands and Mount Tamalpais. The entire island is included within Angel Island State Park and is administered by California State Parks. The island, a California Historical Landmark, has been used for a variety of purposes, including military forts, a US Public Health Service Quarantine Station, and a US Bureau of Immigration inspection and detention facility. The Angel Island Immigration Station on the northeast corner of the island, where officials detained, inspected, and examined approximately one million immigrants, has been designated a National Historic Landmark.

History
Until about ten thousand years ago, Angel Island was connected to the mainland; it was cut off by the rise in sea levels due to the end of the last ice age. From about two thousand years ago the island was a fishing and hunting site for Coast Miwok Native Americans. Similar evidence of Native American settlement is found on the nearby mainland of the Tiburon Peninsula upon Ring Mountain. In 1775, the Spanish naval vessel San Carlos made the first European entry to the San Francisco Bay under the command of Juan de Ayala. Ayala anchored off Angel Island, and gave it its modern name (Isla de los Ángeles); the bay where he anchored is now known as Ayala Cove.

Like much of the California coast, Angel Island was subsequently used for cattle ranching. In 1863, during the American Civil War, the U.S. Army was concerned about Confederate naval raiders attacking San Francisco. It decided to construct artillery batteries on Angel Island, first at Stuart (or Stewart) Point and then Point Knox. Col. René Edward De Russy was the Chief Engineer; James Terry Gardiner was the engineer tasked with designing and supervising the work. The Army established a camp on the island (now known as Camp Reynolds or the West Garrison), and it subsequently became an infantry garrison during the US campaigns against Native American peoples in the West.

Angel Island State Park
In 1955, the State Park Commission authorized California State Parks to purchase 37 acres (15 ha) around Ayala Cove, marking the birth of Angel Island State Park. Additional acreage was purchased four years later, in 1959. The last federal Department of Defense personnel withdrew in 1962, turning over the entire island as a state park in December of the same year. There is one active United States Coast Guard lighthouse on the island at Point Blunt. The lighthouse at Point Stuart has been disestablished.

Ecology
The island's native plant communities include coastal grassland and coastal scrub, mostly on the island's south- and west-facing slopes and ridge tops, and evergreen Woodland – predominantly of Coast Live Oak (Quercus agrifolia), bay (Umbellularia californica), and madrone (Arbutus menziesii) – on the eastern and northern portions of the island sheltered from the westerly winds from the Golden Gate. It is thought that the Coast Miwoks used regular fires to expand the grassland and shrublands at the expense of the woodlands. The grasslands and shrublands provided edible seeds and bulbs, and supported larger numbers of deer and small game.

The Angel Island Mole, Scapanus latimanus insularis, is a subspecies of Broad-footed mole endemic to Angel Island.
The military had planted 24 acres of Bluegum Eucalyptus (Eucalyptus globulus) on the island for windbreaks, beautification, timber, and erosion control. By the mid-1980s, the area covered by eucalyptus had expanded to 86 acres. In the 1980s, California State Parks undertook environmental studies to remove most of the Eucalyptus from the island, in order to restore native flora and reduce fire danger. The proposal generated controversy and received much local media coverage, and was approved to begin in 1990. Eucalyptus were removed from 80 acres between 1990 and 1997, and nursery-grown native plants were planted in the cleared areas. Six acres of historically significant eucalyptus trees were retained.

Here's the our members favorite photos of "Islands in San Francisco". Upload your photo of Angel Island!

Going to Angel Island? Get answers from our friendly locals

Surendra Jeph is the only Touristlink member to visit Angel Island. Have you been here? Click here to save it.