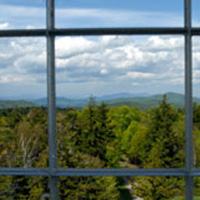 Allis State Park was established in 1928 as Vermont’s second developed state park. The park is named for Wallace Allis, who willed his Bear Mountain Farm to the State of Vermont to be developed as a campground and recreational area.  It is located on the summit of Bear Hill which provides sweeping views of central Vermont from a lookout tower once used to spot forest fires. On a clear day, Killington, Pico, and Mt Ascutney peaks are visible to the south; Camel's Hump and Mt. Mansfield to the north; Abraham, Lincoln, and Ellen to the west; the White Mountains of New Hampshire to the east.
The property was in the Allis family for several generations as a working farm. The entire hill was open pasture land with excellent views from just about any spot. Mr. Allis allowed the public to enjoy the views from the hill; its popularity led him to leave it to the State. Today, all that remains as evidence of the farm are many stone walls that crisscross the property.

Here's the our members favorite photos of "State Parks in Vermont". Upload your photo of Allis State Park!

Going to Allis State Park? Get answers from our friendly locals