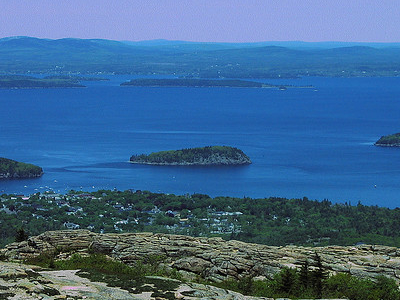 Bar Harbor is a town on Mount Desert Island in Hancock County, Maine, United States. Bar Harbor is a famous summer colony in the Down East region of Maine. It is home to the College of the Atlantic, Jackson Laboratory and Mount Desert Island Biological Laboratory (Salisbury Cove village). Bar Harbor is home to the largest parts of Acadia National Park, including Cadillac Mountain the highest point within 25 miles (40Â km) of the coastline of the Eastern United States, and, offshore, the Porcupine Islands. By 1880, there were 30 hotels, with tourists arriving by train and ferry to the Gilded Age resort that would rival Newport, Rhode Island. The rich and famous tried to outdo each other with entertaining and estates, often hiring landscape gardener and landscape architect Beatrix Farrand, a resident at local Reef Point Estate, to design their gardens. A glimpse of their lifestyles was available from the Shore Path, a walkway skirting waterfront lawns. Yachting, garden parties at the Pot &amp; Kettle Club, and carriage rides up Cadillac Mountain were popular diversions. Others enjoyed horse-racing at Robin Hood Park-Morrell Park. President William Howard Taft played golf in 1910 at the Kebo Valley Golf Club. On March 3, 1918, Eden was renamed Bar Harbor, after the sand and gravel bar, visible at low tide, which leads across to Bar Island and forms the rear of the harbor. The name would become synonymous with elite wealth. It was the birthplace of vice-president Nelson Rockefeller on July 8, 1908. Bar Harbor was visited by President Barack Obama and family on vacation during the summer of 2010.

Here's the our members favorite photos of "Towns & Villages in Trenton". Upload your photo of Bar Harbor!

Going to Bar Harbor? Get answers from our friendly locals