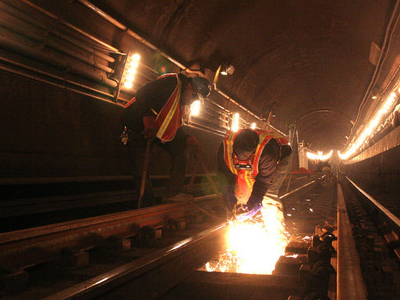 The 60th Street Tunnel carries the N Q R trains of the New York City Subway under the East River and Roosevelt Island between Manhattan and Queens. The tunnel was built as part of the Dual Contracts period of New York City subway construction. The original plan provided for trackage over the Ed Koch Queensboro Bridge, which spans the East River from about 59th Street in Manhattan to Queens Plaza in Queens. However, an investigation made following the 1907 collapse of the Quebec Bridge determined that the bridge would not be able to handle the additional weight of subway trains; thus, the tunnel was constructed to the north. Clifford Milburn Holland served as the engineer-in-charge.

The tunnel opened to revenue service on Sunday, August 1, 1920 at 2 am with a holiday schedule, the same day as the Montague Street Tunnel. Regular service began Monday, August 2, 1920. The two new tunnels allowed passengers to make an 18-mile (29 km) trip from Coney Island, through Manhattan, to Queens for a 5 cent fare. The original construction cost was $5,617,008.97.

Originally, the tunnel only connected the BMT Broadway Line to the Queensboro Plaza station, where trains terminated, and passengers could transfer to elevated trains to continue along either the BMT Astoria Line or the IRT Flushing Line (both of which handled only the narrower elevated trains). After 1949, service patterns were changed so that all BMT trains ran over the Astoria Line and all IRT trains on the Flushing Line.

Before that change, the platform edges had to be shaved back to fit the wider BMT subway trains. In 1955, the BMT 60th Street Tunnel Connection opened, allowing Broadway trains to connect to the local tracks of the IND Queens Boulevard Line at Queens Plaza. This track connection is currently utilized by the R train; the N Q trains continue to use the connection to Queensboro Plaza.

Here's the our members favorite photos of "Tunnels in New York City". Upload your photo of 60th Street Tunnel!

Going to 60th Street Tunnel? Get answers from our friendly locals

Premraj Pushpakaran is the only Touristlink member to visit 60th Street Tunnel. Have you been here? Click here to save it.