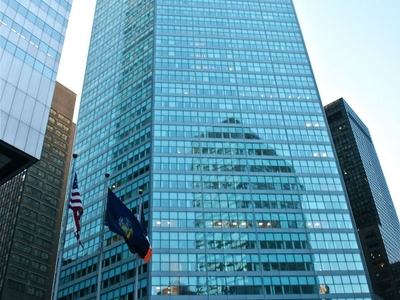 599 Lexington Avenue is a 653ft (199m) tall, 50-story skyscraper in New York City, New York designed by Edward Larrabee Barnes. It was the first building constructed by Mortimer Zuckerman and his company Boston Properties in New York City. The site was acquired for $84 million in 1984, and completed in 1986. It is the 52nd tallest building in New York City. The lobby contains Frank Stella's Salto nel Mio Sacco. The property also contains an entry to the Lexington Avenue - 53rd Street subway station (4 6 <6> E M trains). The building is notable for being completed without an anchor tenant.

Here's the our members favorite photos of "Skyscrapers near Manhattan". Upload your photo of 599 Lexington Avenue!

Going to 599 Lexington Avenue? Get answers from our friendly locals

Surendra Jeph is the only Touristlink member to visit 599 Lexington Avenue. Have you been here? Click here to save it.