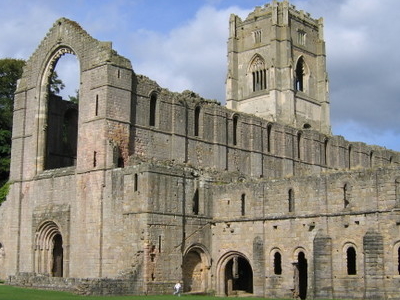 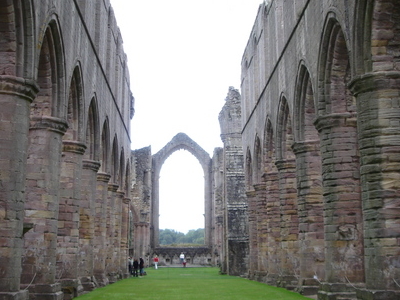 Fountains Abbey is approximately three miles south west of Ripon in North Yorkshire, England near to the village of Aldfield. Founded in 1132, the abbey operated for over 400 years, until 1539, when Henry VIII ordered the Dissolution of the Monasteries. It is one of the largest and best preserved ruined Cistercian monasteries in England. The abbey is a Grade I listed building owned by the National Trust and part of the designated Studley Royal Park including the Ruins of Fountains Abbey UNESCO World Heritage Site.

History
After a dispute and riot in 1132 at the Benedictine house, St Mary's Abbey, in York, 13 monks were expelled and, after unsuccessfully attempting to return to the early 6th-century Rule of St Benedict, were taken into the protection of Thurstan, Archbishop of York. He provided them with land in The Valley of the River Skell, a tributary of the Ure. The enclosed valley had all the natural features needed for the creation of a monastery, providing shelter from the weather, stone and timber for building, and a supply of running water. After Henry Murdac was elected to the abbacy in 1143, the small stone church and timber claustral buildings were replaced. Within three years, an aisled nave had been added to the stone church, and the first permanent claustral buildings built in stone and roofed in tile had been completed.
Architecture
The abbey precinct covered 70 acres (28 ha) surrounded by an 11-foot (3.4 m) wall built in the 13th century, some parts of which are visible to the south and west of the abbey. The area consists of three concentric zones cut by the River Skell flowing from west to east across the site. The church and claustral buildings stand at the centre of the precinct north of the Skell, the inner court containing the domestic buildings stretches down to the river and the outer court housing the industrial and agricultural buildings lies on the river's south bank. The early abbey buildings were added to and altered over time, causing deviations from the strict Cistercian type. Outside the walls were the abbey's granges.
Construction began in 1132 when a two-storey wooden church was built under the oversight of Geoffrey of Clairvaux. A church built with locally quarried sandstone later replaced it. The original cruciform, unaisled stone church was badly damaged by fire in 1146 and rebuilt in enlarged form on the same site. This structure, completed around 1170, was 300-foot (91 m) long and had 11 bays in the side aisles. A lantern tower was added at the crossing of the church in the late 12th century. The presbytery at the eastern end of the church was much altered in the 13th century.
Post-monastic Development
The Abbey buildings and over 500 acres (200 ha) of land were sold by the Crown, on 1 October 1540, to Sir Richard Gresham, the London merchant, father of the founder of the Royal Exchange, Sir Thomas Gresham. Gresham sold some of the fabric of the site, stone, timber, lead, as building materials to help to defray the cost of purchase. The site was acquired in 1597 by Sir Stephen Proctor, who used stone from the monastic complex to build Fountains Hall. Between 1627 and 1767 the estate was owned by the Messenger family who sold it to William Aislaby who was responsible for combining it with the Studley Royal Estate.
World Heritage Site
n 1986 the parkland in which the abbey is situated and the abbey was designated a World Heritage Site by UNESCO. It was recognised for fulfilling the criteria of being a masterpiece of human creative genius, and an outstanding example of a type of building or architectural or technological ensemble or landscape which illustrates significant stages in human history. Fountains Abbey is owned by the National Trust and maintained by English Heritage. The trust owns Studley Royal Park, Fountains Hall, to which there is partial public access, and St Mary's Church, designed by William Burges and built around 1873, all of which are significant features of the World Heritage Site.
The Porter's Lodge, which was once the gatehouse to the abbey, houses a modern exhibition area with displays about the history of Fountains Abbey and how the monks lived. In January 2010, Fountains Abbey and Studley Royal became two of the first National Trust properties to be included in Google Street View, using the Google Trike.
Film Location
Fountains Abbey was used as a filming location by Orchestral Manoeuvres in the Dark for their single Maid of Orleans (The Waltz Joan of Arc) during the cold winter of December 1981. In 1980, Hollywood also came to the site to film the final scenes to the film Omen III: The Final Conflict. Other productions filmed on location at the abbey are the films The Secret Garden, The History Boys, TV series Flambards, A History of Britain, Terry Jones' Medieval Lives, Cathedral and the game show Treasure Hunt.

Here's the our members favorite photos of "Monasteries in Leeds". Upload your photo of Fountains Abbey!

Going to Fountains Abbey? Get answers from our friendly locals