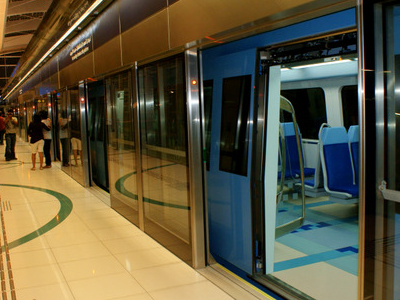 Rashidiya (Arabic: الراشدية, Arabic pronunciation: [arːaʃidiːja]) is a rapid transit station on the Red Line of the Dubai Metro in Dubai. The eastern terminus of the line, it is one of three Metro stations with a park and ride lot, the others being Etisalat and Nakheel Harbour and Tower.

Location:
Rashidiya station is located in Al Rashidiya, a community of eastern Dubai. A residential area, most points of interest near the station are schools and community centres, although Rashidiya is the closest Metro station to the Dubai Airport Expo. The Royal Wing of the Dubai International Airport is located quite close to the station.

Station Layout:
Rashidiya is one of the few stations of the Dubai Metro classed as a type 3 elevated station, indicating it has three tracks rather than the usual two. This allows trains to be held and stored easily. The tracks to and from Rashidiya parallel the southern side of Airport Road, continuing eastward to one of the network's depots.

Here's the our members favorite photos of "Metro Stations in Dubai". Upload your photo of Rashidiya!

Going to Rashidiya? Get answers from our friendly locals

Emiliya Petrova is the only Touristlink member to visit Rashidiya. Have you been here? Click here to save it.