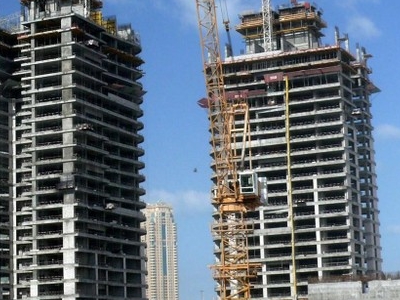 Jumeirah Bay is a complex containing three skyscrapers in Jumeirah Lake Towers, Dubai, United Arab Emirates. The towers are located alongside one of the four lakes in the large Jumeirah Lake Towers project. All three buildings were designed by the National Engineering Bureau, and were developed by Nakheel Properties. Jumeriah Bay is scheduled to be completed in 2009.

The three towers in the complex are Jumeirah Bay 1, Jumeirah Bay 2 and Jumeirah Bay 3. Jumeirah Bay 2 stands as the tallest of the three, and rises the closest to the shoreline. It has 47 floors. The height has not been revealed. Jumeirah Bay 1 and 3 both have 41 floors. However, height figures have not yet been released. The two towers may not be equal in height. The buildings are set back from Jumeirah Bay 2.

Here's the our members favorite photos of "Skyscrapers in Dubai". Upload your photo of Jumeirah Bay!

Going to Jumeirah Bay? Get answers from our friendly locals