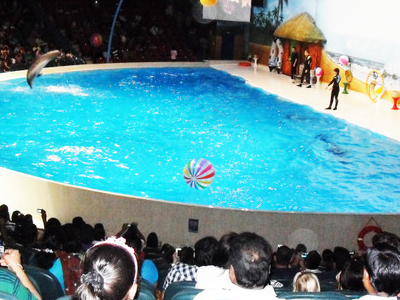 Dubai Dolphinarium is the first fully air-conditioned indoor dolphinarium in the Middle East, providing habitat to dolphins and seals, allowing the public to watch and interact with them through live shows and photo sessions. It is located in the creek side park at Bur Dubai near the Children's City. Dubai Dolphinarium was opened on May 21, 2008 by Dubai Municipality, and is sponsored and supported by Dubai government to provide the general public with entertainment and also educate them regarding dolphins, seals and other marine organisms. It was also reflected that interacting with such friendly mammals like dolphins will motivate young generation to protect marine life and the environment.

Facilities:
Dubai Dolphinarium is a 5,000-square-meter (54,000 sq ft) modern marine facility with around 1250 seating capacity. The Dolphins have their own private habitat area with 600,000 litres (160,000 US gal) of sea water connected to the main arena pool. There is a separate medical pool and seal pool constructed considering well being of these marine mammals. The dolphinarium complex also features kids activities, birthday parties for kids, school field trips, kids corner, Arabesque dance school, restaurant providing quick and fun meals for kids and a mini 5-D cinema theater.

Activities:
Various activities like kids summer camp and Dubai Summer Surprises are held at the Dubai Dolphinarium every year during summer holidays. Dubai Dolphinarium in association with Dubai Municipality organized an Autism Awareness Day from various autism care centres and training centres for children with special needs on April 28, 2011. Dubai Dolphinarium welcomed its one millionth visitor during March, 2012 and various promotional activities were featured during this period.

Here's the our members favorite photos of "Aquariums in Dubai". Upload your photo of Dubai Dolphinarium!

Going to Dubai Dolphinarium? Get answers from our friendly locals

Samson's Safaris is the only Touristlink member to visit Dubai Dolphinarium. Have you been here? Click here to save it.

Love aquariums? Check these out;

Top Voted Aquariums Around the World