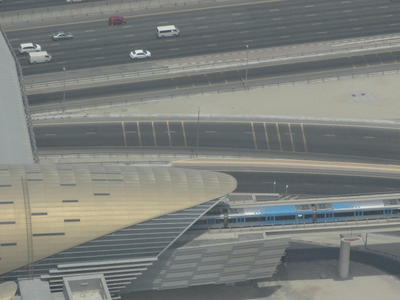 Burj Kahlifa/Dubai Mall (Arabic: برج خليفة / دبي مول, Arabic pronunciation: [burdʒ xaˈliːfa duˈbajː mawl]) is a rapid transit station on the Red Line of the Dubai Metro in Dubai. It is one of the busiest stations of the Dubai Metro, with over 3.180 million passengers in 2011.

Location:
Burj Khalifa/Dubai Mall station is located on the southern side of the interchange between Sheikh Zayed Road, Financial Centre Road and Al Safa St. Directly to the east is the large Downtown Dubai development, containing the Burj Khalifa, the tallest building in the World, and The Dubai Mall, after which the station is named. It is the closest station to a number of major attractions, including The Dubai Fountain and The Address Downtown Dubai.

Here's the our members favorite photos of "Metro Stations in Dubai". Upload your photo of Burj Khalifa/Dubai Mall!

Going to Burj Khalifa/Dubai Mall? Get answers from our friendly locals

Emiliya Petrova is the only Touristlink member to visit Burj Khalifa/Dubai Mall. Have you been here? Click here to save it.