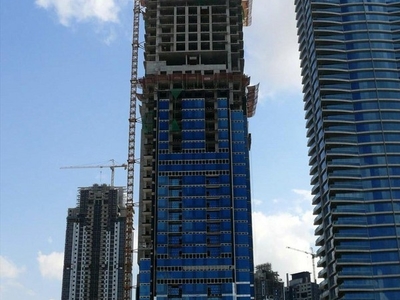 The Al Tayer Tower is a 59-floor residential tower in Dubai, United Arab Emirates. Its location along Sheikh Zayed Road gives it close proximity to Downtown Dubai (the district that includes the Burj Khalifa and the Dubai Mall) and Business Bay. The design of The Tower was completed in 2005, but ground works did not begin until Spring 2006. The building began to rise above ground level in December 2006. The first glass was put on the building in April 2007, but this was only two windows. Not until September did major cladding begin. Tower will have a total of 244 apartments that come in various sizes. Built behind the tower will be an 11-floor parking garage, also built by Al Shafar General Contracting Co. LLC.

Here's the our members favorite photos of "Skyscrapers in Dubai". Upload your photo of Al Tayer Tower!

Going to Al Tayer Tower? Get answers from our friendly locals