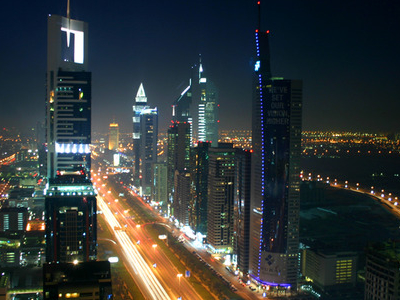 The 21st Century Tower is a 55-story skyscraper along the Sheikh Zayed Road in Dubai . When it was completed in 2003 it took the title of the World's tallest residential building, but later the Eureka Tower in Melbourne, Australia and the Q1 tower in Australia's Gold Coast bumped it to its current position.

It is occupied by Cabin Crew and Flight Crew of Emirates Airline. It has a gym on the top floor and a pool on the roof. It is also home to the Consulate of Chile. The skyscraper contains seven elevators. During requests for an elevator, an intelligent elevator system automatically directs the closest elevator to the requested floor.

Here's the our members favorite photos of "Skyscrapers in Dubai". Upload your photo of 21st Century Tower!

Going to 21st Century Tower? Get answers from our friendly locals