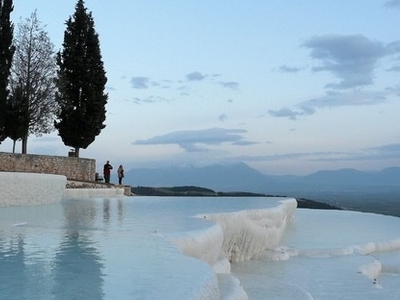 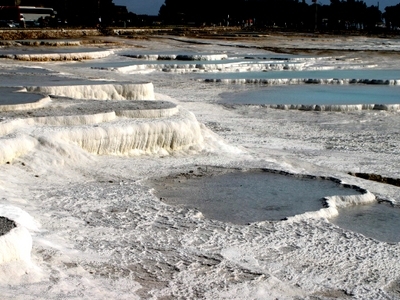 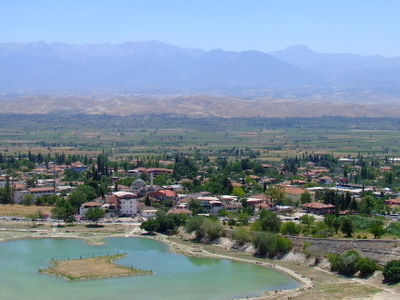 More Photos >
Save me
Been here
Want to go
Show on Map
Here to help 1 tour guides, 2 locals and 4 ambassadors

Pamukkale, meaning "cotton castle" in Turkish, is a natural site in Denizli Province in southwestern Turkey. The city contains hot springs and travertines, terraces of carbonate minerals left by the flowing water. It is located in Turkey's Inner Aegean region, in the River Menderes valley, which has a temperate climate for most of the year.

Tourism is and has been a major industry. People have bathed in its pools for thousands of years. As recently as the mid-20th century, hotels were built over the ruins of Hierapolis, causing considerable damage. An approach road was built from the valley over the terraces, and motor bikes were allowed to go up and down the slopes. When the area was declared a World Heritage Site, the hotels were demolished and the road removed and replaced with artificial pools. Wearing shoes in the water is prohibited to protect the deposits.

Museum:
In this museum, alongside historical artifacts from Hierapolis, there are also artifacts from Laodiceia, Colossae, Tripolis, Attuda and other towns of the Lycos (Çürüksu) valley. In addition to these, the museum has a large section devoted to artifacts found at Beycesultan Hüyük that includes some of the most beautiful examples of Bronze Age craft.

Artifacts from the Caria, Pisidia and Lydia regions are also on display in this museum. The museum’s exhibition space consists of three closed areas of the Hierapolis Bath and the open areas in the eastern side which are known to have been used as the library and gymnasium. The artifacts in open exhibition space are mostly marble and stone. Hierapolis is broken down into ruins.

The underground volcanic activity which causes the hot springs also forced carbon dioxide into a cave, which was called the Plutonium, which here means "place of the god Pluto". This cave was used for religious purposes by priests of Cybele, who found ways to appear immune to the suffocating gas. Tadpoles can be found in the pools.

Here's the our members favorite photos of "Hot Springs in Denizli". Upload your photo of Pamukkale!

Going to Pamukkale? Get answers from our friendly locals

Get in touch with 35 Touristlink members who want to visit Pamukkale or with Unlimited Turkey, Nickolay and 68 others who already have been here.

Love hot springs? Check these out;