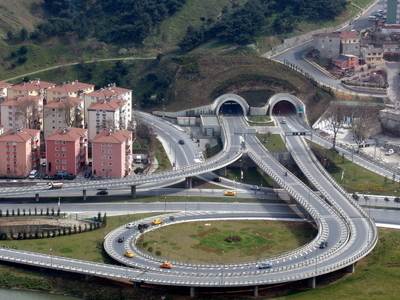 The tunnel is part of a project of the Istanbul Metropolitan Municipality to build seven tunnels for the "City of Seven Hills", which is the nickname of Istanbul. It was opened on March 14, 2009 as the first tunnel of this project after a construction time of four years. Its southeast entry is situated on the Piyalepaşa Boulevard, which runs between the neighborhoods Okmeydanı and Kasımpaşa. The northwest entry is located in Kağıhane. The two independent tubes with two lanes each are 11.80 m (38.7 ft) wide, 7.33 m (24.0 ft) high and 3,180 m (1.98 mi) long.

Here's the our members favorite photos of "Tunnels in Istanbul". Upload your photo of Kağıthane-Piyalepaşa Tunnel!

Going to Kağıthane-Piyalepaşa Tunnel? Get answers from our friendly locals