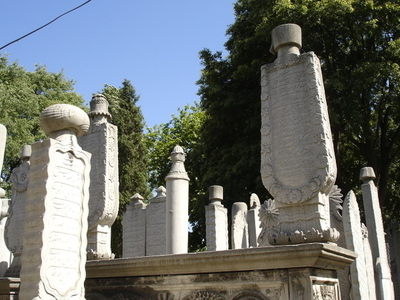 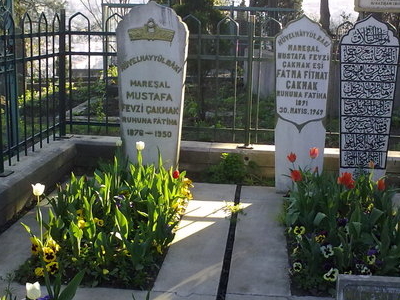 The Eyüp Cemetery (Turkish: Eyüp Mezarlığı), aka Eyüp Sultan Cemetery, is a historic burial ground located in Eyüp district, the European Side of Istanbul, Turkey. It is administered by the General Directorate of Foundations. One of the oldest and largest Muslim cemeteries in Istanbul, it hosts graves of Ottoman sultans and court members, grand viziers, high-ranked religious authorities, civil servants and commanders as well as intellectuals, scientists, artists and poets.

Crime Site:
In the evening hours of a November day in 1994, a 45-year-old Austrian woman professor was assaulted, murdered and robbed as she was descending the hill through the cemetery after a coffee break at the popular cafeteria (called Pierre Loti cafeteria) on the top of the hill. The murderer was a 17 years old car painter.

In the early hours of afternoon on August 25, 2001, prominent Turkish Jewish businessman and a cofounder of Alarko Holding, Üzeyir Garih was found dead by cemetery guards next to the grave of Fevzi Çakmak. He was stabbed ten times, of which seven were deadly. Police arrested a suspect after two hours, who confessed the crime adding he committed the murder for robbery. However, the actual murderer, who robbed Garih's money and stole his mobile phone, was caught ten days later. Reportedly, Garih used to visit the grave of Turkey's first Chief of the General Staff field marshal Çakmak every two weeks.

Shortly after the 2001 murder case, a commissioner at the prosecutor's office of Eyüp district admitted that the Eyüp Cemetery had become a place of prostitution and drug use by negligence. It was reported that since the murder in 1994 no monitoring by police patrol was taking place in the cemetery and at the trail to the cafeteria on the top of the hill, which are frequented by tourists.

Here's the our members favorite photos of "Cemeteries in Istanbul". Upload your photo of Eyüp Cemetery!

Going to Eyüp Cemetery? Get answers from our friendly locals