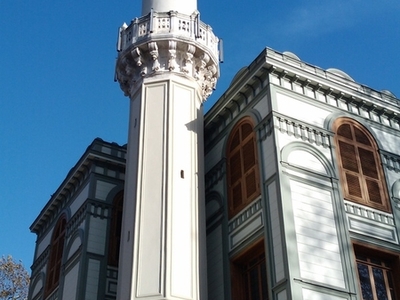 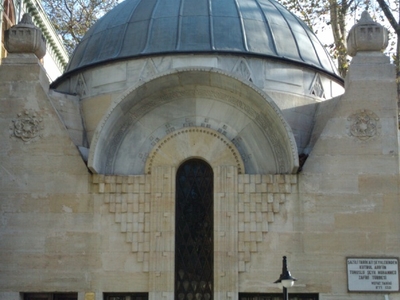 The Ertuğrul Tekke Mosque, (Turkish: Ertuğrul Tekke Camii), is an Ottoman imperial mosque located in Yıldız neighbourhood, Serencebey rise of Beşiktaş district in Istanbul, Turkey. A late Ottoman period mosque, it is constructed as a külliye consisting of a tekke, guest house, türbe, fountain, and library in addition to the mosque.

The construction of the mosque and the külliye complex was commissioned by Ottoman sultan Abdul Hamid II, and finished in 1887. It is dedicated to the founder of the Medeni branch of Shadhili (Turkish: Şaziliye) tariqa, a Libyan sufi, Sheikh Hamza Zafir. The mosque is named after Ertuğrul Gazi, the father of the founder of the Ottoman Empire, Osman I, as a commendation to him. The name also comes from the Ertuğrul regiment, a royal palace guard regiment which comprises Turks from the Domaniç region. Initially the complex only consisted of the mosque, tekke, and the guesthouse.

After the death of Sheikh Hamza Zafir in 1903, his türbe was constructed next to the mosque by the Italian architect Raimondo D'Aronco between 1905 and 1906. The library and the fountain were also added in this expansion. After the passing of Sheikh Hamza Zafir, his two brothers Muhammed Zafir Efendi and Beşir Zafir Efendi became the sheikhs of the tekke. They are also buried in the türbe next to their elder brother. The complex is mainly built as a guesthouse to various sheikhs and Islamic scholars that visit Istanbul from the Islamic World in an effort to strengthen the power of the position of the Caliphate in the Islamic world.

Here's the our members favorite photos of "Mosques in Istanbul". Upload your photo of Ertuğrul Tekke Mosque!

Going to Ertuğrul Tekke Mosque? Get answers from our friendly locals