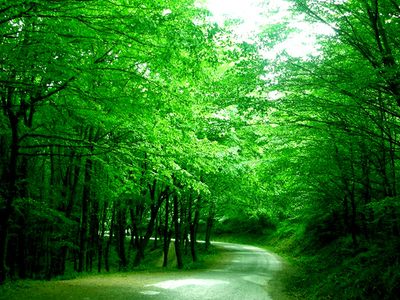 Belgrade Forest (Turkish: Belgrad Ormanı) is a mixed deciduous forest lying 15 kilometers north-west of Istanbul, Turkey. It is named after the hundreds of thousands of Orthodox inhabitants who were deported from the city of Belgrade in 1521 when it fell to the Ottoman Turks. Geographically, the forest is located at the easternmost point of the Thracian Peninsula. Forest terrain is divided between Sarıyer and Eyüp districts. Several historical reservoirs lie within the forest.

Size and Composition of the Forest:
With a region around 5,500 hectares of forest it houses many plant, bird and animal species. The most common tree in the forest is Sessile Oak (Quercus petraea). Belgrade forest is under protection and is one of the most visited recreational areas of Istanbul.

Aqueducts:
Instead of finding many Byzantine remains of aqueducts, there are mainly only Ottoman dams remaining, which were all built over a period of 150 years. The Aqueduct of Valens that straddles busy Atatürk Bulvarı as it runs uphill from the Golden Horn is the largest of the monuments commemorating the complex system needed to bring the water into the city during the 16th-18th centuries.

In the forest there were two separate channeling systems. The older of the two was the Kırkçeşme system that directed water into town Eğrikapı hard against the city walls. Many of the aqueducts and reservoirs that supported this system were originally built in Roman and Byzantine times, but in the 16th century Suleiman the Magnificent commissioned the Ottoman architect Sinan to upgrade it all for the new aqueduct system that would lead into his city. The result was a series of magnificent aqueducts that criss-cross the roads near Kemerburgaz. The Maglova Aqueduct is the largest, with its exceptional strength and structure, but it is no longer accessible to tourists. The newly restored Uzunkemer still stands right across a busy road in the forest.

As the population of İstanbul grew, the water supply system also had to be expanded to cope with the increasing numbers of people living in the city, which resulted in a second supply line; the Taksim system. Most of its aqueducts and reservoirs were built in the 18th century well after the reconstruction that took place earlier in the 16th century. The most noticeable monument is the Mahmud I Kemer, erected in 1732, that stands right beside the road in Bahçeköy. The Taksim system ended at the large reservoir in Taksim Square that now acts as a small art gallery used for tourism.

Recreation and Tourism:
Walking, Jogging & Hiking: One of the most popular activities to do in the Belgrade forest besides looking at the beautiful trees and enjoying nature is the fact that you Can easily jog and hike through the trails. There is a jogging track that begins at a fountain by the Neset Suyu (Neset Spring) and weaves a 6 ½ km route with exercise equipment stationed along the way for public use, and the Istanbul Hash House Harriers often runs through this trail.

Atatürk Arboretum: To see the forest’s foliage during the changing seasons, the best place to visit is the arboretum in the area, which is open during weekdays. In the facility, there is more than 2,000 plant species. The main attraction in the gardens is in the autumn when the collection of oak trees from all around the World can be viewed.

Eating & Drinking: One of the most common things for locals and travelers to do in Istanbul is to take a trip to the Belgrade Forest on the weekend to escape from the heat in the Spring and Summer months. There are areas specifically for recreation and travelers are even allowed to use portable barbecues to enjoy with friends and family. There are seven main picnic areas in the Forest; the most popular destination is Buyuk Bent. This area has its own cafe where you are able to bring your own food and cook on the long wooden tables; drinks and snacks are sold on-site. If you are planning on cooking your own BBQ, it is suggested that you pay attention and use caution as firefighting facilities are not well prepared to deal with forest fires in the area. There are also a few other cafes scattered around the forest, making the area metropolis in some areas, however, most of the areas in the forest consist of wildlife.

Here's the our members favorite photos of "Forests in Istanbul". Upload your photo of Belgrad Forest!

Going to Belgrad Forest? Get answers from our friendly locals

Love forests? Check these out;

Top Voted Forests Around the World