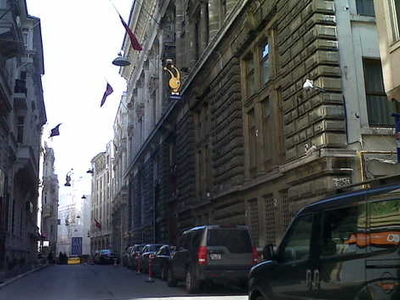 Bankalar Caddesi (English: Banks Street), alternatively known as Voyvoda Caddesi (English: Voivode Street), located in the historic Galata quarter (present-day Karaköy) within the district of Beyoğlu (historic Pera) in Istanbul, Turkey, was the financial center of the Ottoman Empire. It was the street where the prominent banks, financial institutions and insurance companies had their headquarters during the Ottoman period, including the Ottoman Central Bank (originally established as the Bank-ı Osmanî in 1856, and later reorganized as the Bank-ı Osmanî-i Şahane in 1863) and the Ottoman Stock Exchange (Dersaadet Tahvilat Borsası, established in 1866.)

These buildings are still used as headquarters or branch offices by banks and other financial institutions. The southern stop of Tünel (1875), the World's second oldest subterranean railway line after London's Underground (1863), is located near the eastern entrance of Bankalar Caddesi.

The Camondo Steps, a famous pedestrian stairway designed with a unique mix of the Neo-Baroque and early Art Nouveau styles, and built in circa 1870–1880 by the renowned Ottoman-Venetian Jewish banker Abraham Salomon Camondo, is also located on Bankalar Caddesi. The steps lead upstairs to the historic Rue Camondo (present-day Banker Sokak) and Kart Çınar Sokak (the westward extension of Banker Sokak) where the ruins of the Genoese Palazzo del Comune (1316), built by Montano de Marinis, the Podestà of Galata, is located a short walking distance to the left (west) of the stairway, behind the façade of the 1880s Bereket Han office building on Bankalar Caddesi.

Bankalar Caddesi continued to be Istanbul's main financial district until the 1990s, when most Turkish banks began moving their headquarters to the modern central business districts of Levent and Maslak. In 1995, the Istanbul Stock Exchange moved to its current building in the Istinye quarter of the Sarıyer district.

Here's the our members favorite photos of "Famous Streets in Istanbul". Upload your photo of Bankalar Caddesi!

Going to Bankalar Caddesi? Get answers from our friendly locals