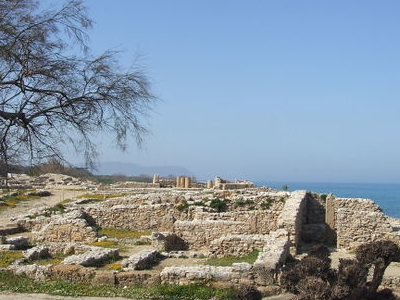 A necropolis is located approximately 1.5 km (0.93 mi) northwest of the Punic city of Kerkouane, Tunisia. The necropolis consists of a series of vaults set in a seaside hill, four primary chamber-tombs, and a surrounding burial area. In 1985, UNESCO declared Kerkouane and its necropolis a World Heritage Site, because "[t]he remains constitute the only example of a Phoenicio-Punic city to have survived."

The necropolis was discovered in 1929 by a local Islamic schoolteacher. This schoolteacher found a large store of buried possessions in the tombs, the most valuable of which he proceeded to sell to treasure hunters and collectors. The sold loot variously included jewellery, ceramics, and scarab gems. Many of the funerary objects and large pottery were too burdensome to be removed, and so were left in the tombs or destroyed. The discovery of the necropolis was not formally documented until some time later, after the schoolteacher revealed his source of wealth to an enquiring law officer.

The most precious find to date is a red-painted sarcophagus with a cover in the shape of a woman identified as the goddess Astarte, protector of the dead, or one of her worshippers. The woman is dressed in a robe and wears a sacred crown known as a polos. She is covered in red, blue, and yellow plaster, and is – with the exception of her feet – perfectly intact. The sarcophagus is prized as one of the only known Punic wood carvings still existing; for this reason, it was taken to Zurich, Switzerland for treatment shortly after its discovery. When news of the find broke, the carved woman was dubbed "the princess of Kerkouane" by the Tunisian press. The sarcophagus now rests in the Kerkouane site museum.

Here's the our members favorite photos of "Cemeteries in Tunisia". Upload your photo of Necropolis of Kerkouane!

Going to Necropolis of Kerkouane? Get answers from our friendly locals