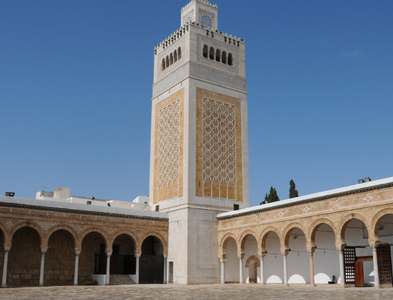 Al-Zaytuna Mosque, or Ez-Zitouna or Ezzitouna Mosque is a major mosque in Tunis, Tunisia. The mosque is the oldest in the Capital of Tunisia and covers an area of 5,000 square metres (1.2 acres) with nine entrances. It has 160 authentic columns brought originally from the ruins of the old city of Carthage. The mosque is known to host one of the first and greatest universities in the history of Islam. Many Muslim scholars were graduated from the Al-Zaytuna for over a thousand years. From Ibn 'Arafa, one of the greatest scholars of Islam, Imam Maziri, the great traditionalist and jurist to the famous Tunisian poet Aboul-Qacem Echebbi and countless others all taught there.

Here's the our members favorite photos of "Mosques in Tunis". Upload your photo of Al-Zaytuna Mosque!

Going to Al-Zaytuna Mosque? Get answers from our friendly locals