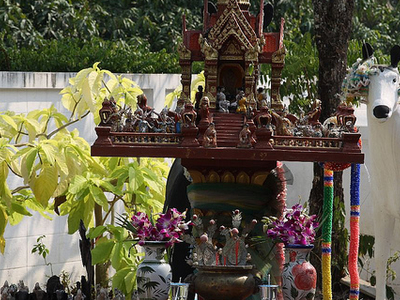 The Military Memorial is located in this temple, Sarika Sub-district, approximately 5 kilometers on the way to Namtok Sarika-Nang Rong (Highway No. 3050). During World War II, the 37th Quartermaster Infantry of the Japanese Military located their camp at the temple. In 1992, the Friend of Asian Alliance War Association built the memorial to honor the 7,920 Thai soldiers who were recruited to work in the camp and died in the war.

Their ashes which were once placed in the temple are now put in the altar of the memorial. An additional attraction is an elaborate Buddha image which was brought here during the war from Vientiane by migrating Laotians. The Buddha image is commonly called Phra Phuttarup Pak Daeng (the red-lipped Buddha image).

Here's the our members favorite photos of "Temples in Khao Yai National Park". Upload your photo of Wat Phrammani!

Going to Wat Phrammani? Get answers from our friendly locals