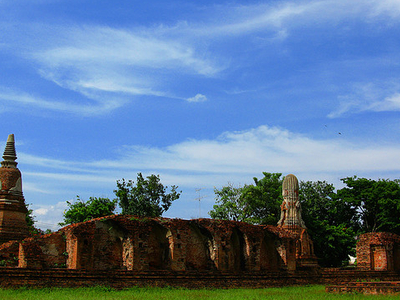 The oldest temple with tallest Prang in Lop Buri, Wat Phra Si Maha That is located behind the railway station near the San Phra Kan. The Lop-Buri style prang in front of the temple was built around 1157 when the town came under Khmer rule. The U-Thong style Buddha images on the prang and the large viharn were later added by King Narai the Great. The laterite prang still has some original lintels and stucco work intact. A number of other chedis and prangs - most of which were restored were greatly influenced by both the Sukhothai and Ayutthaya styles.

Here's the our members favorite photos of "Temples in Lopburi". Upload your photo of Wat Phra Si Maha That!

Going to Wat Phra Si Maha That? Get answers from our friendly locals