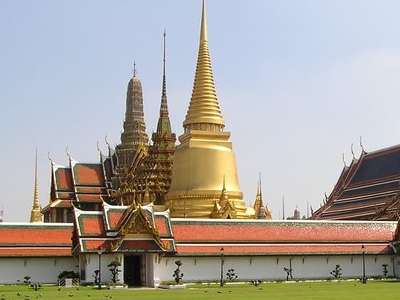 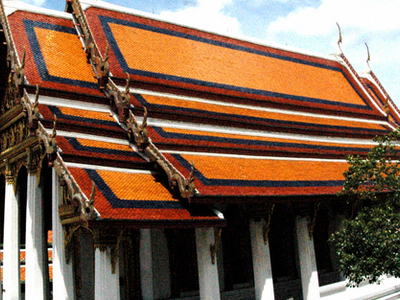 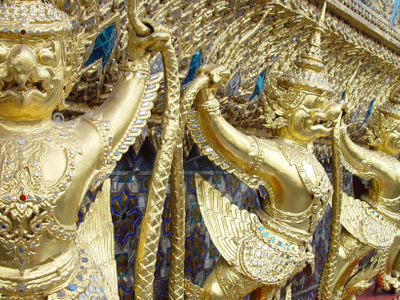 The Wat Phra Kaew (Wat Phra Kaeo, Temple of the Emerald Buddha, Wat Phra Si Rattana Satsadaram) is regarded as the most sacred Buddhist temple (wat) in Thailand. It is a "potent religio-political symbol and the palladium of Thai society". It is located in the historic centre of Bangkok (district Phra Nakhon), within the precincts of the Grand Palace.

The main building is the central ubosoth, which houses the statue of Emerald Buddha. The legendary history of this Buddha image is traced to India, five centuries after the Lord Buddha attained Nirvana, till it was finally enshrined in Bangkok at the Wat Phra Kaew temple in 1782 during Rama I's reign (1782–1809).

While legend traces this statue to India, its rich historical records dates its finding in Cambodia in the 15th century, moved to Laos in the 16th century and then to Vientiane where it remained for 215 years, and finally to Thailand in the 18th century.

Legend
The earliest legend narrated to the iconic emerald image of the Buddha is that of Nagasena, a saint in India who with the help of Hindu god, Vishnu and demigod Indra got the Emerald Buddha image made, 500 years after Buddha attained Nirvana, from the precious stone of Emerald.

History
The Emerald Buddha statue originated in India as explained in the legend, but it is also linked to first vassal Kingdom of Cambodia. The image disappeared when Burmese raiders sacked Ayuttaya also spelt "Ayudaya" and the image was feared lost. Continuing with the legend of the saint Nagasena of India, after remaining in Pataliputra (present day Patna) for three hundred years, the Emerald Buddha image was taken to Sri Lanka to save it from a civil war. In 457, King Anuruth of Burma sent a mission to Ceylon with a request for Buddhist scriptures and the Emerald Buddha, in order to promote Buddhism in his country.

Architecture
Wat Phra Kaeo has a plethora of buildings within the precincts of the Grand Palace, which covers a total area of over 94.5 hectares (234 acres). It has over 100 buildings with “200 years royal history and architectural experimentation” linked to it. The architectural style is named as Rattanakosin style (old Bangkok style). The main temple of the Emerald Buddha is very elegantly decorated and similar to the temple in ancient capital of Ayudhya. The roof is embellished with polished orange and green tiles, the pillars are inlaid in mosaic and the pediments are made of rich marble.

Worship and ceremonies
Early in the Bangkok period, the Emerald Buddha used to be taken out of its temple and paraded in the streets to relieve the city and countryside of various calamities (such as plague and cholera). However, this practice was discontinued during Rama IV's reign as it was feared that the image could get damaged during the procession and also a practical line of thinking that Rama IV held "that diseases are caused by germs, not by evil spirits or the displeasure of the Buddha". The image also marks the changing of the seasons in Thailand, with the king presiding over the seasonal ceremonies.

Rules of entry and conduct
The sacred temples in Thailand follow a dress code, which is strictly followed. Men must wear long pants and long-sleeved shirts and shoes; women must wear long skirts. Visitors who arrive dressed otherwise may rent appropriate clothing items at the entry area of the temple. It is compulsory to remove the shoes before entering the temple, as a sign of respect of the Buddha, as is the practice in all other temples in Thailand. While offering prayers before the Buddha image, the sitting posture should avoid any offensive stretching of feet towards the deity; the feet should be tucked in towards the back.

Here's the our members favorite photos of "Temples in Bangkok". Upload your photo of Wat Phra Kaew!

Going to Wat Phra Kaew? Get answers from our friendly locals

Get in touch with 2 Touristlink members who want to visit Wat Phra Kaew or with Grahame Pike, Theresa Slender and 39 others who already have been here.