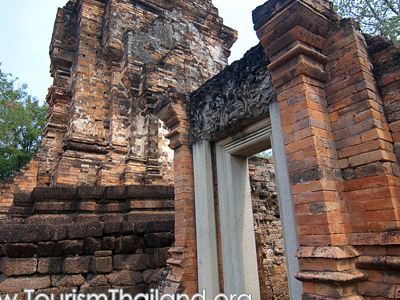 Si Thep Historical Park is an interesting source of knowledge on ancient remains of Phetchabun, covering the area of Si Thep Ancient Town, which was originally called “Mueang Aphai Sali”, believed to have been constructed during the prosperous time of the Ancient Khmer Empire, aged not less than 1,000 years.

There has been a discovery of more than 70 ancient remains. Some have been excavated and renovated. The outer town covers an area of 1,589 rai in a rectangular shape, connecting to the inner one. It is double the size of the inner one with 6 entrances, as well as, ponds and remains scattered within the compound.

The Information Centre (New Centre):
It is a building displaying ancient remains and exhibitions on the history and archaeology of the Si Thep Historical Park, comprising a conference room or a lecture room prior to entering an exhibition hall.

The Archaeological Excavation Building:
It is a building displaying human skeletons and those of the elephant which were discovered in 1988.

The Information Centre (Old Centre):
It is an exhibition venue displaying information in rotation on history, archaeology, as well as, activities on the preservation of arts and culture. The building comprises an exhibition hall and a book and souvenir shop.

Prang Song Phi Nong:
It comprises 2 prangs situated on a large laterite base facing west, each with a single entrance. From the archaeological excavation, a stone lintel engraved into the God Shiva carrying his consort Parvati sitting on his mount Usubharaj bull was discovered. It is estimated to have been built during the 11th -12th century in the Baphuon style of Khmer art and the Angkor Wat Period. The small prang was later constructed on the boundary wall surrounding the large prang.

Prang Si Thep:
Prang Si Thep is architecture in the Khmer style of art facing to the west. It is made of bricks and laterite. The base is made of laterite into the so-called lotus base, similar to the general Khmer architecture, while the relic chamber is made of bricks. From the excavation in this area, engraved lintel fragments aged around the 11th - 12th century were discovered. It is assumed to have been constructed in a period later than the Khao Khlang Nai. Later, in the 13th century, there was an attempt to renovate it, but this was not succeesful, assuming from the scattered leftovers in the area. It presents the Khmer style of architectural plan for religious sites, similar to those found in the northeastern part of Thailand.

Khao Khlang Nai Ancient Monument:
Khao Khlang Nai Ancient Monument is situated nearly in the middle of the town, and was constructed around the 6th – 7th century. Its plan is rectangular facing to the east, and its art is similar to Dvaravati towns such as Nakhon Pathom and Khu Bua Ancient Town. The laterite was utilised as a main construction material. Around its base are decorative stucco sculptures of human beings and animals in the Dvaravati style of art. The structure has been believed to be a weapon and treasure cellar and thus, has been called “Khao Khlang”.

Chaopho Si Thep Shrine:
Chaopho Si Thep Shrine is behind the Saen Ngon Gate (in the west). The shrine has been highly revered by the locals. Every year, there will be a worshipping ceremony in February during the 2nd – 3rd day of the waxing moon in the 3rd lunar month.

Here's the our members favorite photos of "Ruins in Northern Thailand". Upload your photo of Si Thep Historical Park!

Going to Si Thep Historical Park? Get answers from our friendly locals