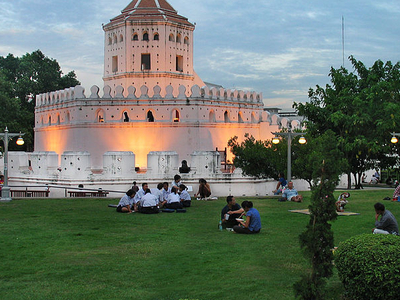 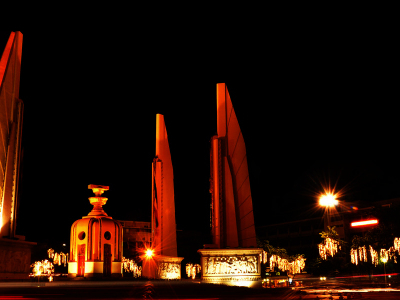 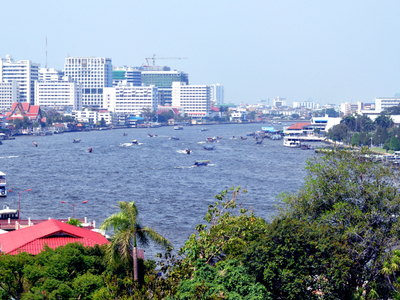 More Photos >
Save me
Been here
Want to go
Show on Map
Here to help 80 tour guides, 230 locals and 11 ambassadors

Bangkok is the capital and the most populous city of Thailand. It is known in Thai as Krung Thep Maha Nakhon or simply About this sound Krung Thep. The city occupies 1,568.7 square kilometres (605.7 sq mi) in the Chao Phraya River delta in Central Thailand, and has a population of over 8 million, or 12.6 percent of the country's population. Over 14 million people (22.2 percent) live within the surrounding Bangkok Metropolitan Region, making Bangkok an extreme primate city, dwarfing Thailand's other urban centres in terms of importance.

Bangkok traces its roots to a small trading post during the Ayutthaya Kingdom in the 15th century, which eventually grew in size and became the site of two capital cities: Thonburi in 1768 and Rattanakosin in 1782. Bangkok was at the heart of Siam's (as Thailand used to be known) modernization during the later 19th century, as the country faced pressures from the West. The city was the centre of Thailand's political struggles throughout the 20th century, as the country abolished absolute monarchy, adopted constitutional rule and underwent numerous coups and uprisings. The city grew rapidly during the 1960s through the 1980s and now exerts a significant impact among Thailand's politics, economy, education, media and modern society.

The Asian investment boom in the 1980s and 1990s led many multinational corporations to locate their regional headquarters in Bangkok. The city is now a major regional force in finance and business. It is an international hub for transport and health care, and is emerging as a regional centre for the arts, fashion and entertainment. The city is known for its vibrant street life and cultural landmarks, as well as its notorious red-light districts. The historic Grand Palace and Buddhist temples including Wat Arun and Wat Pho stand in contrast with other tourist attractions such as the nightlife scenes of Khaosan Road and Patpong. Bangkok is among the World's top tourist destinations. It is named the most visited city in MasterCard's Global Destination Cities Index, and was named "World's Best City" for four consecutive years by Travel + Leisure magazine.

Bangkok's rapid growth accompanied by little urban planning and regulation has resulted in a haphazard cityscape and inadequate infrastructure systems. Bangkok's eight million cars and 17 million commuter trips per day, coupled with an inadequate road network despite an extensive expressway network, have resulted in chronic and crippling traffic congestion. This in turn caused severe air pollution in the 1990s. The city has since turned to public transport in an attempt to solve this major problem. Four rapid transit lines are now in operation, with more systems under construction or planned by the national government and the Bangkok Metropolitan Administration.

Tourism:
Bangkok is one of the world's top tourist destination cities. MasterCard ranked Bangkok as the global top destination city by international visitor arrivals in its Global Destination Cities Index, with 15.98 million projected visitors in 2013. The city is ranked fourth in cross-border spending, with 14.3 billion dollars projected for 2013, after New York, London and Paris. Euromonitor International ranked Bangkok sixth in its Top City Destinations Ranking for 2011. Bangkok was also named "World's Best City" by Travel + Leisure magazine's survey of its readers for four consecutive years, from 2010 to 2013.

As the main gateway through which visitors arrive in Thailand, Bangkok is visited by the majority of international tourists to the country. Domestic tourism is also prominent. The Department of Tourism recorded 26,861,095 Thai and 11,361,808 foreign visitors to Bangkok in 2010. Lodgings were made by 15,031,244 guests, who occupied 49.9 percent of the city's 86,687 hotel rooms.

Bangkok's multi-faceted sights, attractions and city life appeal to diverse groups of tourists. Royal palaces and temples as well as several museums constitute its major historical and cultural tourist attractions. Shopping and dining experiences offer a wide range of choices and prices. The city is also famous for its dynamic nightlife. Although Bangkok's sex tourism scene is well known to foreigners, it is usually not openly acknowledged by locals or the government.

Here's the our members favorite photos of "Cities in Central Thailand". Upload your photo of Bangkok!

Going to Bangkok? Get answers from our friendly locals