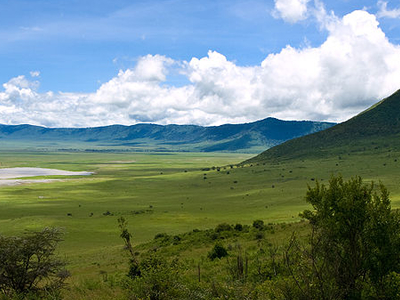 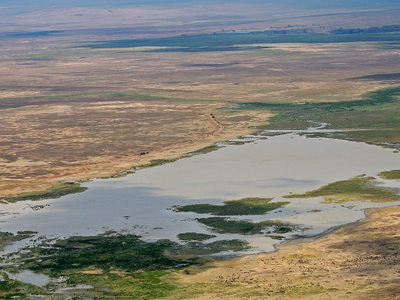 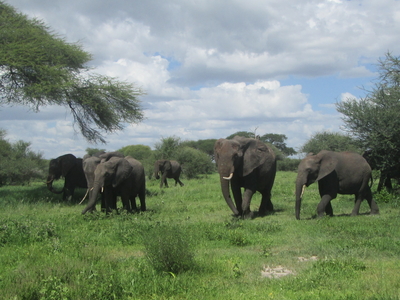 More Photos >
Save me
Been here
Want to go
Show on Map
Here to help 6 tour guides, 2 locals and 19 ambassadors

The main feature of the NCA is the Ngorongoro Crater, a large, unbroken, unflooded volcanic caldera. The crater, which formed when a giant volcano exploded and collapsed on itself some two to three million years ago, is 610 m (2,000 ft) deep and its floor covers 260 km2 (100 sq mi). Estimates of the height of the original volcano range from fifteen to nineteen thousand feet (4500 to 5800 metres) high.

Wildlife:
A population of approximately 25,000 large animals, largely ungulates along with reputedly the highest density of mammalian predators in Africa, lives in the crater. Large animals in the crater include the black rhinoceros, the local population of which declined from about 108 in 1964-66 to between 11-14 in 1995, and the hippopotamus, which is very uncommon in the area. There also are many other ungulates: the wildebeest (7,000 estimated in 1994), the zebra (4,000), the eland, and Grant's and Thompson's gazelles (3,000).

The crater has the densest known population of lions, numbering 62 in 2001. On the crater rim are leopards, elephants – numbering 42 in 1987 but only 29 in 1992 – mountain reedbuck, and buffalo (4,000 in 1994). In the middle of the crater there is a large lake inhabited by hundreds of flamingoes and from a distance, they appear as a pink border of the lake. However, since the 1980s the crater's wildebeest population has fallen by a quarter to about 19,000 and the numbers of eland and Thomson's gazelle also have declined while the buffalo population has increased greatly, probably due to the long prevention of fire which favors high-fibrous grasses over shorter, less fibrous types.

In summer, enormous numbers of Serengeti migrants pass through the plains of the reserve, including 1.7 million wildebeest, 260,000 zebra, and 470,000 gazelles. Waterbuck occur mainly near Lerai Forest; servals occur widely in the crater and on the plains to the west. Common in the reserve are lions, hartebeest, spotted hyenas and jackals. Cheetahs, although common in the reserve, are scarce in the crater itself. The African Wild Dog has recently disappeared from the crater and may have declined elsewhere in the Conservation Area as well, as well as throughout Tanzania according to C. Michael Hogan.

The crater highlands on the side facing the easterly trade winds receives 800–1200 mm of rain a year and is covered largely in montane forest, while the less-steep west wall receives only 400–600 mm; this side is grassland and bushland dotted with Euphorbia bussei trees. The crater floor is mostly open grassland with two small wooded areas dominated by Acacia xanthophloea.

The Munge Stream drains Olmoti Crater to the north, and is the main water source draining into the seasonal salt lake in the center of the crater. This lake is known by two names: Makat as the Maasai called it, meaning salt; and Magadi. The Lerai Stream drains the humid forests to the south of the Crater, and it feeds the Lerai Forest on the crater floor - when there is enough rain, the Lerai drains into Lake Magadi as well. Extraction of water by lodges and NCA headquarters reduces the amount of water entering Lerai by around 25%.

The other major water source in the crater is the Ngoitokitok Spring, near the eastern crater wall. There is a picnic site here open to tourists and a huge swamp fed by the spring, and the area is inhabited by hippopotamus, elephants, lions, and many others. Many other small springs can be found around the crater's floor, and these are important water supplies for the animals and local Masaai, especially during times of drought.

Here's the our members favorite photos of "Wildlife Reserves in Ngorongoro". Upload your photo of Ngorongoro Conservation Area!

Going to Ngorongoro Conservation Area? Get answers from our friendly locals

Get in touch with 97 Touristlink members who want to visit Ngorongoro Conservation Area or with Deepak Gupta, Simon Milambo and 229 others who already have been here.