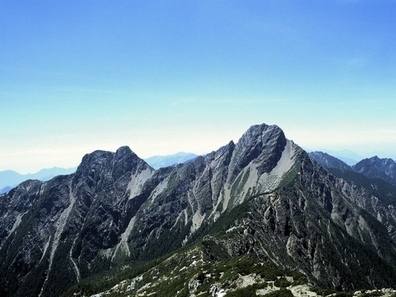 Yushan (Chinese: 玉山; pinyin: Yùshān; literally "Jade Mountain"), also Mount Yu is the highest mountain in Taiwan and the fourth highest mountain on an island. In the past, Yushan was known among English-speaking expats and missionaries as Mount Morrison, thought to have been named in honor of the 19th century missionary Robert Morrison. Today, the mountain is referred to as Yushan or Jade Mountain.

In the winter, Yushan is often capped with thick snow which makes the entire peak shine like stainless jade, hence its name. On July 21, 2009, Yushan was elected one of 28 finalists in the New7Wonders of Nature voting campaign. It even had held the top position in the “Mountains and Volcanoes” category on the list of first round voting of the 77 nominees ended on July 7, 2009.

Yushan and surrounding mountains belong to Yushan Range, which is part of Yushan National Park. The national park is Taiwan's largest, highest and least accessible national park. It contains the largest tract of wilderness remaining in Taiwan and is also valued for its pristine forests and faunal diversity, including many endemic species.

The highest point of Yushan range, Yushan, is 3,952 metres (12,966 ft) above sea level, and is the highest point in the western Pacific region outside of the Kamchatka Peninsula. Yushan was once in the ocean and raised to the current height because the Eurasian Plate slid under the neighboring Philippine Sea Plate.

Here's the our members favorite photos of "Peaks or Summits in Nantou County". Upload your photo of Yushan!

Going to Yushan? Get answers from our friendly locals

Get in touch with 3 Touristlink members who want to visit Yushan or with Ajay Varma, Quân Nguyễn and 1 others who already have been here.

Peaks or Summits in Taiwan