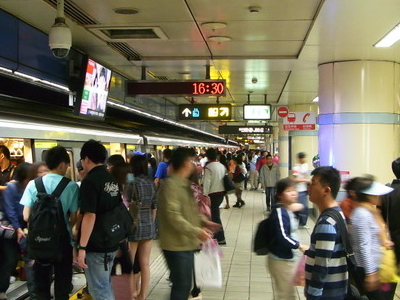 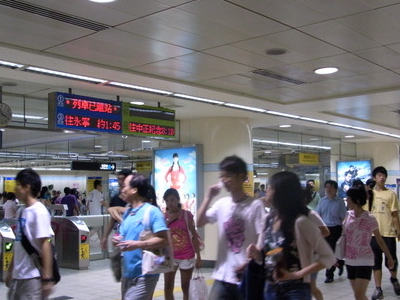 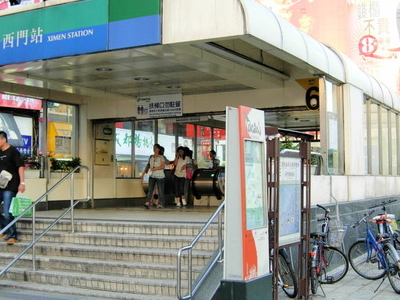 The Taipei Metro Ximen Station is located between the Zhongzheng and Wanhua districts in Taipei City, Taiwan. It is a transfer station on the Nangang Line, Banqiao Line, and Xiaonanmen Line. It will become a terminus for the Xindian Line before opening for traffic on the Songshan Line in 2013.

The station is named for the old west gate of the city, whose location is roughly where the current station is located.

Station overview:
The station is a three-level, underground structure with two island platforms and six exits. The two platforms are stacked, thus allowing for cross-platform interchange when the Songshan Line begins service. Washrooms are inside the entrance area. In November 2010, the daily ridership at Ximen Station was 112,000, making it the fourth busiest station on the network, just behind Taipei Main Station, Taipei City Hall and Zhongxiao Fuxing Station.

It is situated under Zhonghua Rd, at the intersection of Chengdu Rd, Hengyang Rd, and Baoqing Rd. The station is also connected to the Ximen Underground Mall (not yet open for revenue service but allowed for passageway).

Exit 6 is heavily used by young people accessing the Ximending shopping area. The exit opening is set at the top of the pedestrian zone, although there is still vehicular traffic in that area. The station is often crowded on weekends, especially in the afternoon.

Here's the our members favorite photos of "Railway Stations near Zhongzheng". Upload your photo of Ximen Station!

Going to Ximen Station? Get answers from our friendly locals

Chocket Asiong is the only Touristlink member to visit Ximen Station. Have you been here? Click here to save it.