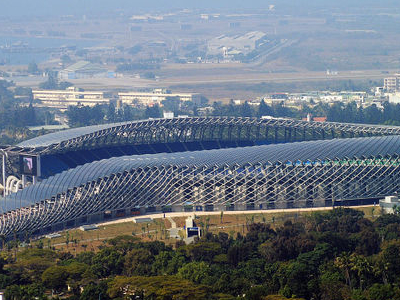 National Stadium iis a multi-purpose stadium in Kaohsiung, Taiwan. It is currently the largest stadium in Taiwan in terms of capacity.

Completed in 2009, it will be used mostly for athletics and rugby events, including hosting the main events for the 2009 World Games. The stadium will have a capacity of 55,000 people. After the games the stadium will likely be used for some Taiwan football team matches.

The stadium, designed by Japanese architect Toyo Ito, makes use of solar energy to provide its power needs. The World Games Stadium, semi spiral-shaped, like a dragon, will be the first stadium in the world to provide power using solar energy technology. The solar panels covering the vast external face of the stadium are able to generate most of the power required for its own operation, as well as additional power that can be saved.

Here's the our members favorite photos of "Stadiums in Yungkang". Upload your photo of World Games Stadium!

Going to World Games Stadium? Get answers from our friendly locals