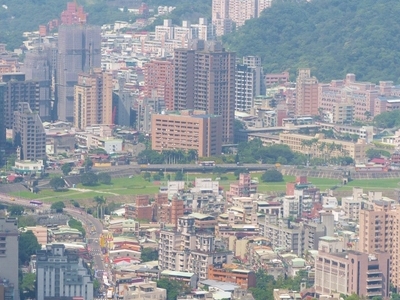 Wenshan District is a district in Taipei, Taiwan. It is the southernmost district of the twelve districts in Taipei. The district was formed in 1990 by combining Jingmei and Muzha. Wenshan previously referred to the region south of Taipei Basin (including Xindian and Pinglin).

Notable attractions in this district include the Taipei Zoo, Maokong (貓空), Jingmei Night Market, Xianji Rock (仙跡岩). The Examination Yuan and the National Chengchi University are also in this district.

Although Wenshan is in Taipei city, it seems rather remote at first sight; surrounded by mountains, many people find it is a good place to escape downtown Taipei. On weekends, many people drive to Maokong to enjoy one of the area's numerous teahouses and to breathe the fresh air.

The mountains in Wenshan are ideal for people to exercise on the hiking trails. The Taipei Zoo, which houses two pandas on loan from China, is often jammed by adults and children alike, especially during summer vacation. After the construction of the MRT, it became easier to travel to Wenshan from other districts. Wenshan District also contains the city mayor's residence.

Here's the our members favorite photos of "Neighborhoods in Taipei". Upload your photo of Wenshan!

Going to Wenshan? Get answers from our friendly locals