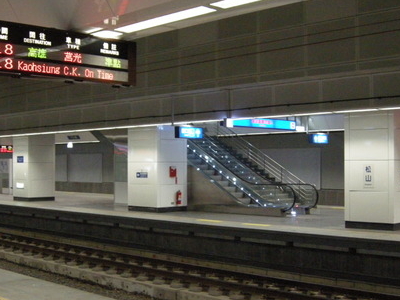 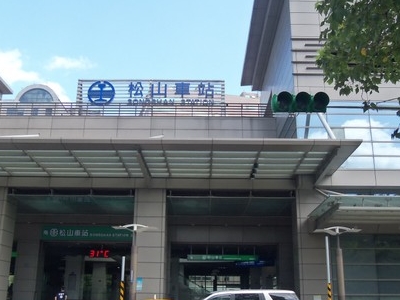 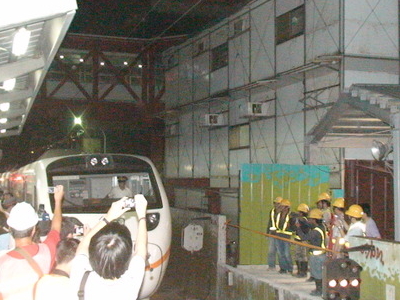 Songshan Station (Chinese: 松山車站; pinyin: Sōngshān Chēzhàn) is a railway station in Songshan District, Taipei, Taiwan. It is served by the Taiwan Railway Administration and will become a terminal station of the Taipei Metro Songshan Line when opens for service in 2013.

The new Songshan Station building has already finished construction. It was built by Ruentex Development Company who won a NT$3.3 billion build-operate-transfer (BOT) contract on the new station building. There are a total of two island platforms (four tracks). The Taipei Metro station is still under construction; it will have an island platform and five exits. It will be connected via an underground passage.

Songshan Station became the principle south-bound origin and north-bound terminus for the West Trunk Line starting in 1986, after the reconstruction of Taipei Station began in 1985. However, these functions were moved to Chitu in Keelung City shortly before the reconstruction.

The former Songshan Station was underground and operated by the TRA. It opened in June 1994 as part of the Taipei Railway Underground Project.[4] All railway lines and platforms have been moved underground (from at-grade) since September 21, 2008 in a move to improve safety and area development.[5] A 7.6-km tunnel was constructed between this station and neighboring Nangang Station at a cost of NT$76.5 billion.

Public Art:
The Taipei Metro station will feature a theme of "Festivities of Light" to reflect the mix of traditional and modern culture, local religion, and administration. It will enhance the night activity in the area.

Here's the our members favorite photos of "Railway Stations near Songshan". Upload your photo of Songshan Station!

Going to Songshan Station? Get answers from our friendly locals