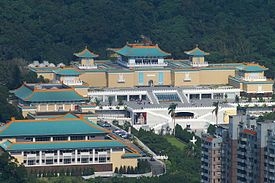 Shilin District is a district of Taipei. The name "Shilin" was derived from Pattsiran, the Ketagalan word for "hot springs". It was then transliterated into Chinese as "八芝蘭" Bāzhīlán, and finally re-analyzed as "scholars as many as the trees in the woods" (士多如林).

Shilin is home to a large foreign population, mainly concentrated in the Tianmu area. It has long been a top choice for expatriates from Europe, the United States, and Japan to live, run businesses, and establish embassies and offices[1] due mainly to the natural environment--sitting at the feet of Taipei's Mt. Yang Ming--and because the international schools are all located here. The central command of the Republic of China Navy is located in Shilin.

The district is home to many national historical sites, including historical temples, markets, and buildings. It is also the location of the Tianmu Baseball Stadium, Bailing Sport Park, Shilin Fitness Center and Chinese Culture and Movie Center. The Shuangxi Park and Chinese Garden is also located in Shilin.

Transportation:
In addition to many bus lines, the district is served by the Taipei Metro Tamsui Line. It is served by Provincial Highway No. 2 and many other main roads through the city.

Here's the our members favorite photos of "Neighborhoods in Taipei". Upload your photo of Shilin!

Going to Shilin? Get answers from our friendly locals