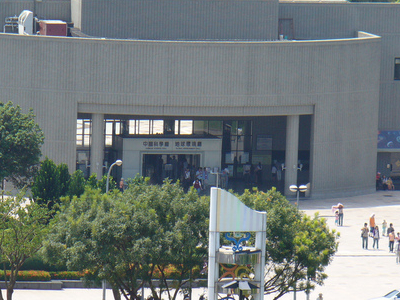 The National Museum of Natural Science is a national museum in North District, Taichung, Taiwan.The museum covers 22 acres (89,000 m2) and is a six-venue complex housing: the Space IMAX Theater, Science Center, Life Science Hall, Human Cultures Hall, Global Environment Hall, and Botanical Garden.
The Research and Collection Division of the museum is divided into departments for zoology, botany, geology and anthropology.
The architect and educator Pao-Teh Han was appointed as the first director of the museum in 1987, a post he held until 1995. He was involved with helping to set up the museum before that from 1981. The current director is Wei-Hsin Sun.
In 1980, the government announced plans to build the museum. On New Year's Day of 1986, the first phase of the museum opened, including the Science Center, Space IMAX Theater, administrative offices, and outdoor grounds.The second phase was completed in August 1988, and the third and fourth phases were completed in August 1993. In 1999, the number of specimens in the museum had grown to 551,705.

Here's the our members favorite photos of "Museums in Taichung". Upload your photo of National Museum of Natural Science!