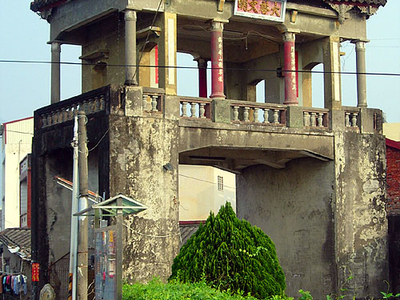 The Meinong East Gate Tower (Chinese: 瀰濃東門樓; pinyin: Mínóng Dōngmén Lóu) is a historical building in Meinong District, Kaohsiung, Taiwan. The tower was constructed in 1755 to become the defense installation on the east side of Minong Village. The tower was destroyed during the revolt against Empire of Japan in 1895. In 1937, the tower was upgraded by local merchants and dignitaries. During the Pacific War in the 1940s, a small extension of the tower was added at the top in which a large bell was hung to be used as an air-raid alarm.

However, both of the extension and the bell were removed after the war. In May 2000, the gate was designated as a county-level ancient monument by the Kaohsiung County Government. The tower has a height of about 10 meters. The front of the gatehouse hangs the banner of Initiation of Civilization which refers to the simulation of a local elite's inscription, which witnesses the changes of Meining in time.

Here's the our members favorite photos of "Historic Houses in Kaohsiung". Upload your photo of Meinong East Gate Tower!

Going to Meinong East Gate Tower? Get answers from our friendly locals