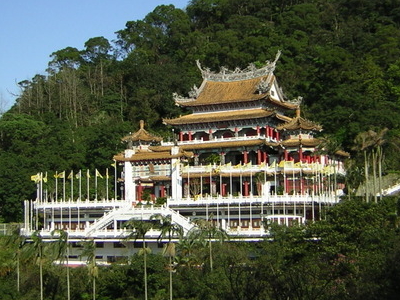 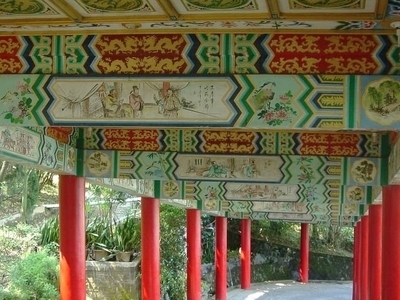 Chih Nan Temple (Chinese: 指南宮) is a Taoist temple on the slopes of Houshan (猴山, "Monkey Mountain") in Muzha, a suburb of Taipei, Taiwan. It was founded in 1882. The temple's main deity is Lü Dongbin, one of the Eight Immortals. As Lü is said to dwell in the southern courtyard of the heavenly court, the temple acts as a compass pointing toward the south (指南, zhĭnán); hence the name.

Popular folklore holds that unmarried couples who visit the temple together will break up. One explanation is that Lü Dongbin, famous for his Taoist sexual prowess, can be counted upon to seduce any unmarried woman (older versions specify that she must be a virgin). Another is that since Lü Dongbin's love for Immortal Woman He was unanswered, he is jealous of lovers.

Chi Nan Temple is famous for its stairway of "1000" steps. (This is to the Yuanzhen Pond and the Tudigong shrine; the gate of the Chunyang Chapel requires a further 300 steps.) Several bus routes also serve the temple, especially No. 530 from Zhinan Bus Company. Access by cable car was available between 2007 and 2008, was then suspended due to erosion-related structural problems, and has since been restored.The temple is accessible via the Maokong Gondola Zhinan Temple Station.

Here's the our members favorite photos of "Temples near Wenshan". Upload your photo of Chi Nan Temple!

Going to Chi Nan Temple? Get answers from our friendly locals