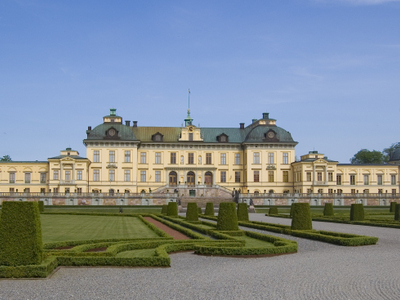 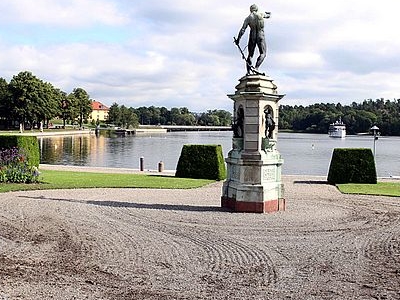 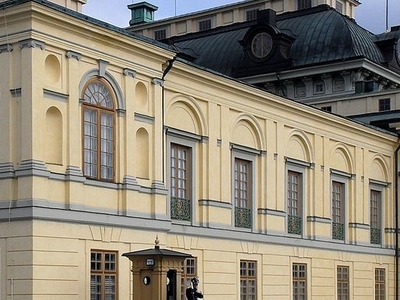 History
Origin
The name Drottningholm (literally meaning "Queen's islet") came from the original renaissance building designed by Willem Boy, a stone palace built by John III of Sweden in 1580 for his queen, Catherine Jagellon. This palace was preceded by a royal mansion called Torvesund. The Queen Dowager Regent Hedwig Eleonora bought the castle in 1661, a year after her role as Queen of Sweden ended, but it burnt to the ground on 30 December that same year.

Royal residence
The current Swedish royal family have used Drottningholm as their primary residence since 1981. Since then, the Palace has also been guarded by the Swedish Military in the same fashion as Stockholm Palace.

The palace
The palace and its grounds have seen many renovations, changes and additions over the past 400 years. The largest renovation, in which electricity, heating, sewage, water lines were either installed or updated and the castle roof replaced, took place between 1907 and 1913. During a 20-year-period beginning around 1977, several major areas of the palace were restored and rebuilt. The library and national hall received much of the attention and fire protection was installed throughout the palace.

The palace church
The church was designed and erected by Nicodemus Tessin the Elder. It was completed by his son in May, 1746. It is used to this day by the people of Lovön parish, who worship in the church on the last Sunday of every month. Inside the castle church a Cahman organ from 1730 is still in use. Another noteworthy item is the traditional church tapestry which was made by Gustaf V of Sweden.

The gardens
The gardens and park areas surrounding the castle and its buildings are one of the main attractions for the tourists that visit the palace each year.The gardens have been established in stages since the castle was built, resulting in different styles of parks and gardens.

The UNESCO comments were: The Royal Domain of Drottningholm stands on an island in Lake Mälar in a suburb of Stockholm. With its palace, perfectly preserved theatre (built in 1766), Chinese pavilion and gardens, it is the finest example of an 18th-century northern European royal residence inspired by the Palace of Versailles.

Here's the our members favorite photos of "Palaces in Stockholm". Upload your photo of Drottningholm Palace!

Going to Drottningholm Palace? Get answers from our friendly locals

Get in touch with 1 Touristlink members who want to visit Drottningholm Palace or with Arun who already have been here.