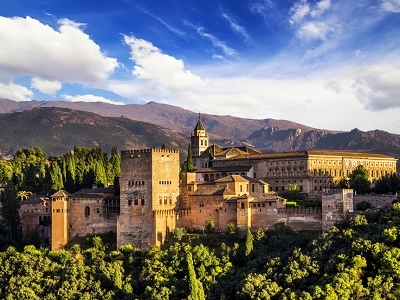 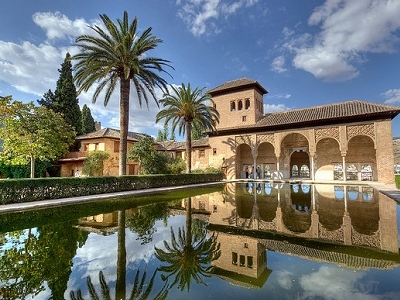 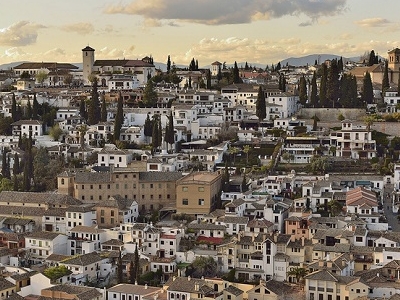 Alhambra the complete form of which was Calat Alhambra is a palace and fortress complex located in Granada, Andalusia, Spain. It was constructed during the mid 10th century by the Berber ruler Badis ben Habus of the Kingdom of Granada in al-Andalus, occupying the top of the hill of the Assabica on the southeastern border of the city of Granada.

Alhambra was "discovered" in the 19th century by European scholars and travelers, with restorations commencing. It is now one of Spain's major tourist attractions, exhibiting the country's most significant and well known Berber Islamic architecture, together with 16th-century and later Christian building and garden interventions. The Alhambra is a UNESCO World Heritage Site, and the inspiration for many songs and stories.

The decoration consists, as a rule, of stiff, conventional foliage, Arabic inscriptions, and geometrical patterns wrought into arabesques. Painted tiles are largely used as panelling for the walls. The palace complex is designed in the Mudéjar style which is characteristic of western elements reinterpreted into Islamic forms and widely popular during the Reconquista, the reconquest of the Iberian Peninsula from the Muslims by the Christian kingdoms.

Art And Architectural Details
The decorations within the palaces typified the remains of Moorish dominion within Spain and ushered in the last great period of Andalusian art in Granada. With little of the Byzantine influence of contemporary Abassid architecture,[1] artists endlessly reproduced the same forms and trends, creating a new style that developed over the course of the Nasrid Dynasty.

The Nasrids used freely all the stylistic elements that had been created and developed during eight centuries of Muslim rule in the Peninsula, including the Calliphal horseshoe arch, the Almohad sebka (a grid of rhombuses), the Almoravid palm, and unique combinations of them, as well as innovations such as stilted arches and muqarnas (stalactite ceiling decorations).

History
Completed towards the end of Muslim rule of Spain by Yusuf I (1333–1353) and Muhammed V, Sultan of Granada (1353–1391), the Alhambra is a reflection of the culture of the last centuries of the Moorish rule of Al Andalus, reduced to the Nasrid Emirate of Granada. It is a place where artists and intellectuals had taken refuge as the Reconquista by Spanish Christians won victories over Al Andalus.

Hall Of The Ambassadors
The Salón de los Embajadores (Hall of the Ambassadors) is the largest in the Alhambra and occupies all the Torre de Comares. It is a square room, the sides being 12 m (37 ft) in length, while the centre of the dome is 23 m (75 ft) high. This was the grand reception room, and the throne of the sultan was placed opposite the entrance.

Hall Of The Abencerrajes
The Sala de los Abencerrajes (Hall of the Abencerrages) derives its name from a legend according to which the father of Boabdil, the last sultan of Granada, having invited the chiefs of that line to a banquet, massacred them here. This room is a perfect square, with a lofty dome and trellised windows at its base. The roof is decorated in blue, brown, red and gold, and the columns supporting it spring out into the arch form in a remarkably beautiful manner. Opposite to this hall is the Sala de las dos Hermanas (Hall of the two Sisters), so-called from two white marble slabs laid as part of the pavement.

Here's the our members favorite photos of "Palaces in Granada". Upload your photo of The Alhambra!

Going to The Alhambra? Get answers from our friendly locals

Get in touch with 16 Touristlink members who want to visit The Alhambra or with Carlos Oribe, Roman and 28 others who already have been here.