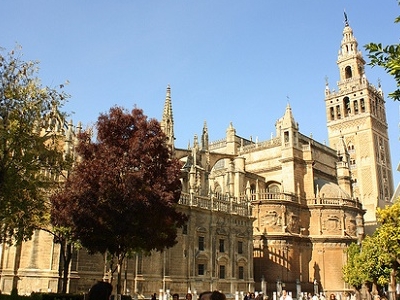 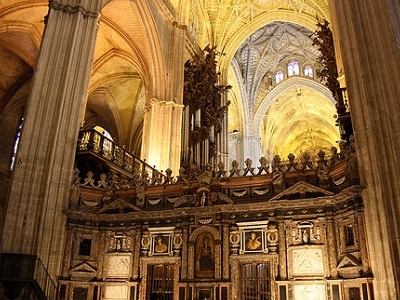 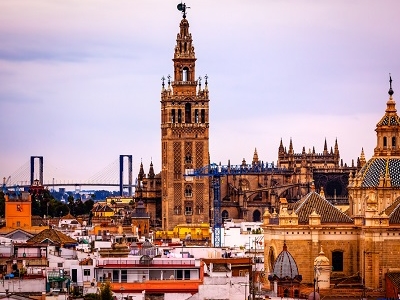 The Cathedral of Saint Mary of the See (Spanish: Catedral de Santa María de la Sede), better known as Seville Cathedral, is a Roman Catholic cathedral in Seville (Andalusia, Spain). It is the largest Gothic cathedral and the third-largest church in the World. It was registered in 1987 by UNESCO as a World Heritage Site, along with the Alcázar palace complex and the General Archive Of The Indies.

After its completion in the early 16th century, Seville Cathedral supplanted Hagia Sophia as the largest cathedral in the world, a title the Byzantine church had held for nearly a thousand years. The cathedral is also the burial site of Christopher Columbus. The Archbishop's Palace is located on the northeastern side of the cathedral.

Description
Seville Cathedral was built to demonstrate the city's wealth, as it had become a major trading center in the years after the Reconquista in 1248. In July 1401 it was decided to build a new cathedral since the structure of the current building, an ancient Muslim mosque which had been converted into a Christian church, was so badly damaged by the 1356 earthquake.

According to local oral tradition, the members of the cathedral chapter said: "Let us build a church so beautiful and so great that those who see it built will think we were mad". Construction began in 1402 and continued until 1506.

Giralda
The Giralda is the bell tower of the Cathedral of Seville. Its height is 343 feet (105 m) feet. Its square base is 23 feet (7.0 m) above sea level and is 44 feet (13 m) feet long per side. It was built to resemble the minaret of the Koutoubia Mosque in Marrakech (Morocco), although the top section of the bell tower dates from the Renaissance.

Chapels
The cathedral has 80 chapels, in which 500 masses were said daily as reported in 1896. The baptistery Chapel of Saint Anthony contains the painting of The Vision of St. Anthony (1656) by Bartolomé Esteban Murillo. In November 1874, it was discovered that thieves had cut out the portion depicting Saint Anthony.

Then in January 1875, a Spanish immigrant attempted to sell the same fragment to a New York City art gallery. The man stated it was a complete original by Murillo, Saint Anthony being one of the artist's favorite subjects. The owner of the gallery, Hermann Schaus, negotiated a price of $250 and contacted the Spanish consulate. Upon securing the sale, Schaus sent it to the Spanish Consulate, which shipped it to Seville via Havana and Cadiz.

Here's the our members favorite photos of "Churches in Seville". Upload your photo of Seville Cathedral!

Going to Seville Cathedral? Get answers from our friendly locals

Get in touch with 23 Touristlink members who want to visit Seville Cathedral or with Carlos Oribe, Carlos Frias and 55 others who already have been here.