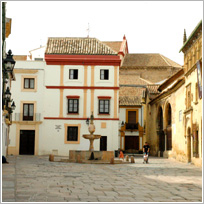 Situated in the district of the Axerquia, the square gets its name from the Renaissance fountain in the middle, whose main decorative feature is the figure of a potro (colt). Traditionally, the square was a place where cattle were bought and sold, and artisans worked, as can be seen from the famous posada (inn), which bears the same name. On the other side of the square are the Fine Arts Museum and the Julio Romero de Torres Museum.

Here's the our members favorite photos of "Key Buildings in Córdoba". Upload your photo of Plaza del Potro!

Going to Plaza del Potro? Get answers from our friendly locals