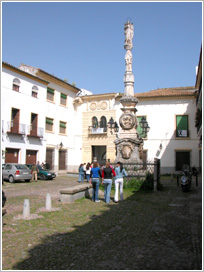 This square, which was built in the 16th century, lies next to the one of the side walls of the church of San Pedro. The stately home of the Aguayos family, now a religious school, dates from the same period, and gave its name to the square. In the middle of the square, a Triumphal Monument to San Rafael was built in 1763.

Here's the our members favorite photos of "Key Buildings in Córdoba". Upload your photo of Plaza de los Aguayo!

Going to Plaza de los Aguayo? Get answers from our friendly locals