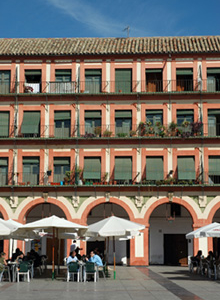 The space where this square now stands was once the main entrance to the Roman amphitheatre. Archaeological excavations have unearthed a series of wonderful mosaics from this period, which are now on show in the Castle of the Christian Monarchs. The present-day square is rectangular with arched porticos running around the ground floor, designed in the style of the old city squares of Castille, of which it is the only one of its kind in Andalusia. It was used in olden days as a bullring, and to this day there is a street named Toril (Bulls' enclosure). The square has seen everything, from autos de fe and public addresses to public executions during the French Invasion, and now contains a number of cafes and bars, as well as hosting a Medieval Market in the month of January.

Here's the our members favorite photos of "Key Buildings in Córdoba". Upload your photo of Plaza de la Corredera!

Going to Plaza de la Corredera? Get answers from our friendly locals