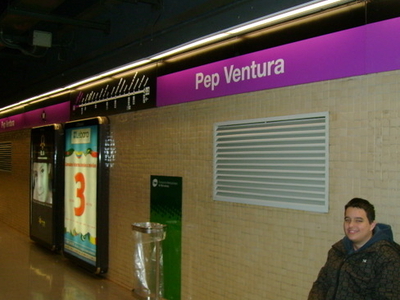 Pep Ventura is the name of a Barcelona metro station located in the municipality of Badalona, in the metropolitan area of Barcelona, and served by L2. It was the northern terminus of that line until 2010, when it was extended into the town centre and into the station Badalona Pompeu Fabra. It was opened in 1985, then as part of L4, which had been extended to there from La Pau. In 2002, though, that branch became part of L2. This station is located under Avinguda del Marquès de Mont-roig, next to Plaça Pep Ventura, in Badalona.

Here's the our members favorite photos of "Metro Stations in Barcelona". Upload your photo of Pep Ventura!

Going to Pep Ventura? Get answers from our friendly locals