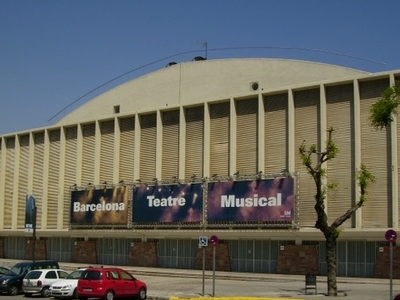 The Palau dels Esports de Barcelona (Barcelona Sports Palace) is a multi-purpose indoor arena in Barcelona, Catalonia, Spain. It is on Lleida Street on the slopes of Montjuïc, a hill to the south east of the city centre. The arena is able to host competitions of any indoor sport. In 2000 it was adapted to better accommodate theatre and musical shows and given a new name: Barcelona Teatre Musical. The seating capacity was reduced from 8,000 to 3,500, but comfort and the acoustic quality were enhanced.

Inaugurated in 1955 for the Mediterranean Games, it was designed by the architect Josep Soteras. It was the only indoor arena of its type in Barcelona until 1971 when FC Barcelona inaugurated the Palau Blaugrana. Even after this, the Palau dels Esports continued to be the only indoor arena in public hands: for this reason it continued to host the main sporting, social, cultural and musical events that took place in the city.

Here's the our members favorite photos of "Sporting Areas in Barcelona". Upload your photo of Palau dels Esports de Barcelona!

Sporting Areas in Region of Catalonia