Palace of the Marquises of El Carpio 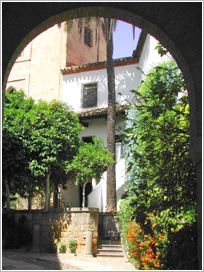 In calle San Fernando, very near the Portillo Arch, part of the 15th century palace of the Mendez de Sotomayor family can be seen from the street. It was one of the first grand noble houses in the city, and dates back to 1236, when King Fernando III granted the family the task of defending and watching over the city walls after the city of Cordoba was captured. The building incorporated into its structure one of the watchtowers and part of the 15th century city walls. Inside, there is a courtyard in neo-Arabic style and the ruins of a Roman house in the cellars. The small front garden strikes a contrast with the huge, military design of the building. It was remodelled in 1933, when the present owners managed to restore some of the building's original features.

Here's the our members favorite photos of "Key Buildings in Córdoba". Upload your photo of Palace of the Marquises of El Carpio!